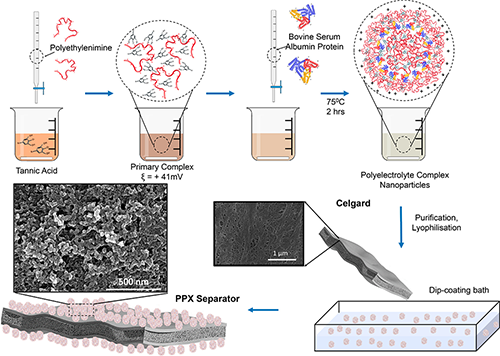 Lithium-sulfur (Li-S) batteries are a promising alternative to lithium-ion batteries because – at least theoretically – they can render 3-6 times higher energy density (2600 Wh kg-1). In addition, sulfur is an abundant material and its use as a cathode material has other advantages such as low cost and a wide operating temperature range.

The sulfur electrochemistry in Li-S batteries is highly dependent on solid-liquid-solid multi-phase conversion. Consequently, the electrolyte amount plays a primary role in the practical performance of Li–S cells: a lean electrolyte volume (i.e. a low electrolyte volume relative to sulfur as the active material) is essential for practical Li–S batteries, yet under these conditions it is highly challenging to achieve acceptable electrochemical performances regarding sulfur kinetics, discharge capacity, Coulombic efficiency, and cycling stability especially for high-sulfur-loading cathodes.

In developing Li-S battery technology, researchers have borrowed many components from the mature lithium-ion battery, such as the separator. However, because the working mechanism of Li-S cells is fundamentally different, there is a need for a suitable separator specifically designed for Li-S.

Batteries are electrochemical energy storage systems that commonly include electrodes, electrolyte, and separator. The electrolyte contributes to the ionic connection between cathode and anode, while the separator serves as electronic insulator to prevent the short circuit between anode and cathode.

“We are the first group to tackle the problem of improving Li-S battery energy density by re-engineering the separator,” Petar Jovanović, a PhD candidate in the Nanoscale Science and Engineering Laboratory(NSEL) at Monash University, and the paper’s first author. “Our motivation is to challenge the current efforts of achieving lean electrolyte conditions, which focus on the cathode and utilize exotic and expensive materials with complex synthesis procedures. This approach also isn’t well suited for scaling up.”

Jovanović explains that previous attempts to functionalize the separator have found that a large density of functional groups is essential for regulating polysulfides and enhancing ion transport properties. Since polyelectrolyte complexation chemistry is being used in the biomedical field, the NSEL team hypothesized that they could take this class of materials and introduce it to batteries, particularly because of the high density of functional groups and the ability to tune its properties.

“Until now, the focus of achieving lean electrolyte conditions has been on engineering novel cathode designs or materials,” says Jovanović. “We have demonstrated an alternative, lower cost and highly scalable solution to that by shifting this responsibility to the separator. Furthermore, we have shown that practical separator design is a complex interplay of a large number of variables, and that next-generation separator design should be approached holistically.”

A polyelectrolyte complex is formed as the result of Coulombic interactions between oppositely charged polyionic components. By selecting polyions with negative charges, positive charges and hydrophobic domains, the researchers were able to synthesize an amphiphilic nanoparticle that could be directly dip-coated onto an otherwise very low surface energy polyolefin separator such as Celgard (the most commonly used separator in electrochemical cells).

This polyelectrolyte complex nanoparticle decorated (PPX) separator has the highest recorded polysulfide adsorption capacity in literature, greatly improved ion transport properties, is environmentally benign, low-cost and simple to synthesize, in addition to the ability to act as an anode/separator surface modulator.

The team was able to select morphology, pore size and type of functional groups by varying the ratio of positive to negative charges and changing the synthesis conditions such as temperature, rate of reactant addition and stirring speed (turbulence).

“We found that the large number of amines, phenol and carbonyl groups were responsible for the record-high polysulfide adsorption, while these same groups were also responsible for providing ion hopping pathways that improved ionic conductivity and lithium-ion transference number,” Jovanović points out.

The trillions of tiny molecular nanomachines that are at work inside our bodies and are keeping us alive perform such tasks as building and breaking down molecules, moving materials around a cell, and processing and expressing genetic information – and they do this while consuming remarkably little energy.