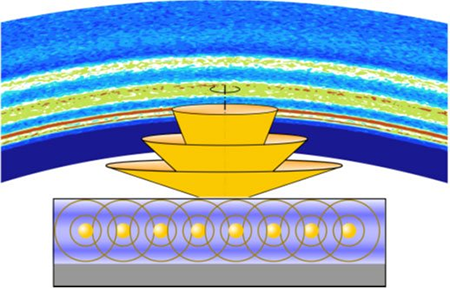 Scientists make extensive use of X-ray fluorescence to map elements in materials. However, this technique does not have the needed spatial sensitivity unless the probe is finely focused.
Scientists have now found a way to turn X-ray fluorescence into an ultra-high position-sensitive probe to measure tiny internal structures called nanostructures in thin films (Nature Communications, « Reconstruction of Evolving Nanostructures in Ultrathin Films with X-ray Waveguide Fluorescence Holography »). These thin films can be a hundred times finer than a human hair.
In the new technique, called X-ray waveguide fluorescence holography, the fluorescence emissions are enhanced and guided by the thin films themselves. The fluorescence reveals the evolution of nanostructures in real time with nearly atomic-level resolution, something no other technique has achieved.
Thin nanostructured films are an essential component of many electronic and light-related technologies. The guided X-ray fluorescence in this new technique gives scientists a way to examine thin films in their original locations and in operation. This allows scientists to watch nanostructures in thin films evolve with unprecedented precision. This ability will help researchers design thin films for new applications and technologies.
X-ray fluorescence emission in free space is isotropic. In general, it is not considered a high-resolution structural probe. However, in a confined space like a thin film, the fluorescence distribution turns into a regular pattern thanks to the interface reflection. As a result, the pattern consists of deconstructive and constructive interferences, known as nodes and antinodes of the standing waves.
Similar phenomena have been seen for light waves in optical fiber and for micrometer waves in kitchen microwave ovens. When the fluorescence takes off from the thin film, its power distribution preserves, forming a so-called fluorescence hologram. Nanostructures in the film alter the interference pattern and thus leave a trace in the hologram.
The researchers demonstrated their idea with thin polymer films consisting of gold nanoparticles at the Advanced Photon Source, a DOE Office of Science user facility at Argonne National Laboratory. They excited the embedded gold particles with an X-ray beam incident at a grazing angle. The emitted X-ray fluorescence was collected with a single-photon sensitive X-ray detector.
With a comprehensive suite of algorithms developed for this technique, the researchers could reconstruct the gold particles’ spatial distributions with a near-atomic resolution. In addition, the technique’s non-destructive nature allowed them to watch how these particles evolved as the thin film was thermally annealed.
This technique may also be combined with novel X-ray coherent surface scattering imaging techniques to provide high-resolution 3D chemical and structural information for thin films. A one-of-kind X-ray surface imaging beamline is under design and development for the APS-Upgrade at the Advanced Photon Source.

High-entropy alloys (HEAs), which are formed by combining nearly equal parts of several – usually five or more – primary metals, are an emerging class of advanced materials that hold great potential for creating materials with superior mechanical, thermal, and catalytic properties.