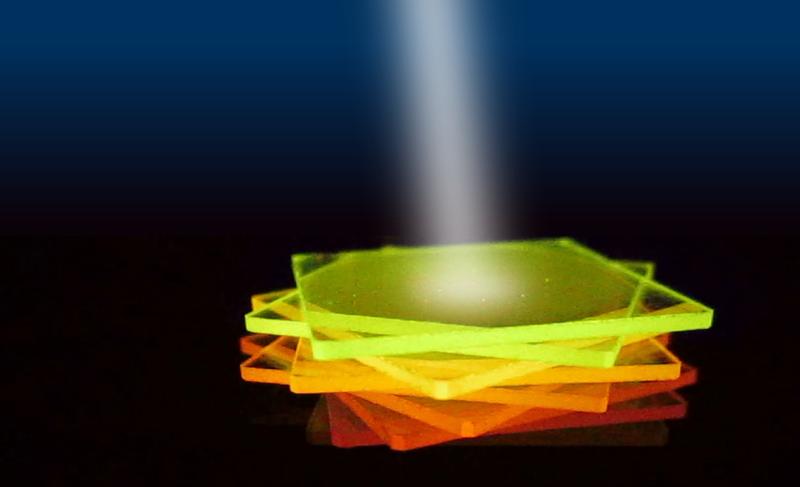 In a recent publication in the scientific journal Advanced Materials (“Accurate Wavelength Tracking by Exciton Spin Mixing”), a team of physicists and chemists from TU Dresden presents an organic thin-film sensor that describes a completely new way of identifying the wavelength of light and achieves a spectral resolution below one nanometer.

As integrated components, the thin-film sensors could eliminate the need for external spectrometers in the future. A patent application has already been filed for the novel technology.

Spectroscopy comprises a group of experimental methods that decompose radiation according to a specific property, e.g. wavelength or mass. It is considered one of the most important analytical methods in research and industry.

Spectrometers can determine colors (wavelengths) of light sources and are used as sensors in various applications, such as medicine, engineering, food industry and many more. Commercially available instruments are usually relatively large and very expensive. They are mostly based on the principle of the prism or grating: light is refracted and the wavelength is assigned according to the angle of refraction.

At the Institute for Applied Physics (IAP) and the Dresden Integrated Center for Applied Physics and Photonic Materials (IAPP) of the TU Dresden, such sensor components based on organic semiconductors have been researched for years. With the spin-offs Senorics and PRUUVE, two technologies have already been developed towards market maturity.

Now, researchers at the IAP and IAPP, in cooperation with the Institute of Physical Chemistry, have developed a thin-film sensor that describes a completely new way of identifying the wavelength of light and, due to its small size and cost, has clear advantages over commercially available spectrometers.

The principle of operation of the novel sensors is as follows: Light of unknown wavelength excites luminescent materials in a hair-thin film. The film consists of a mixture of long-glowing (phosphorescent) and short-glowing (fluorescent) entities, which absorb the light under investigation in different ways. The intensity of the afterglow, can be used to infer the wavelength of the unknown input light.

“We exploit the fundamental physics of excited states in luminescent materials,” explains Anton Kirch, doctoral student at the IAP. “Light of different wavelengths excites in such a system, when properly composed, certain proportions of long-lived triplet and short-lived singlet spin states. And we reverse that dependence. By identifying the spin fractions using a photodetector, we can identify light wavelengths.”

“The great strength of our research alliance here in Dresden is our partners,” says Prof. Sebastian Reineke, who coordinated the project. “Together with the groups of Prof. Alexander Eychmüller from Physical Chemistry and Karl Leo, professor of Optoelectronics, we can carry out all the fabrication and analysis steps ourselves, starting with material synthesis and film processing and ending with the fabrication of the organic detector.”

Dr. Johannes Benduhn is group leader for Organic Sensors and Solar Cells at the IAP: “I was honestly very impressed that a simple photoactive film combined with a photodetector can form such a high-resolution device.”

Using this strategy, the scientists have achieved sub-nanometer spectral resolution and have successfully tracked minor wavelength changes of light sources. In addition to characterizing light sources, the novel sensors can also be used in counterfeit protection: “The small and inexpensive sensors could be used, for example, to quickly and reliably check banknotes or documents for certain security features and thus determine their authenticity, without any need for expensive laboratory technology,” explains Anton Kirch.

In a newly-published study (Small, “A Universal Pick-and-Place Assembly for Nanowires”), a team of researchers in Oxford University’s Department of Materials led by Harish Bhaskaran, Professor of Applied Nanomaterials, describe a breakthrough approach to pick up single nanowires from the growth substrate and place them on virtually any platform with sub-micron accuracy.

In a recent publication in the scientific journal Advanced Materials (“Accurate Wavelength Tracking by Exciton Spin Mixing”), a team of physicists and chemists from TU Dresden presents an organic thin-film sensor that describes a completely new way of identifying the wavelength of light and achieves a spectral resolution below one nanometer.