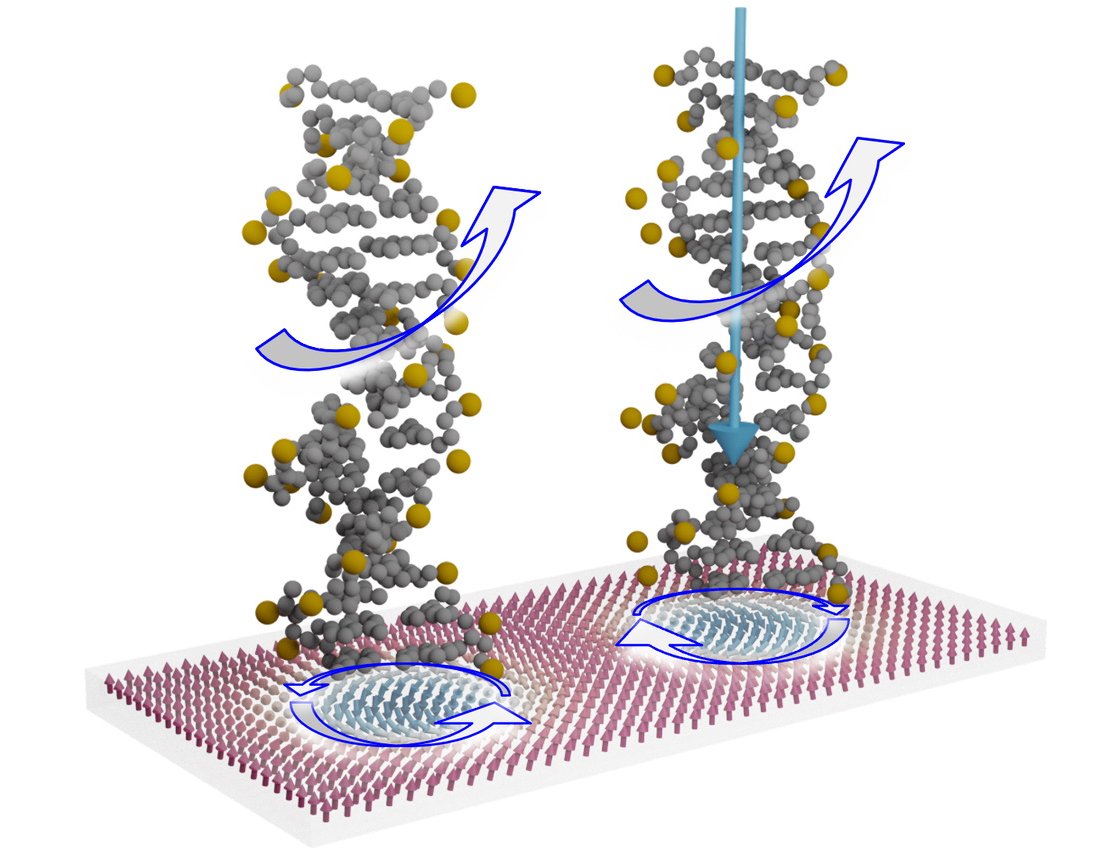 Researchers at Johannes Gutenberg University Mainz (JGU) are pursuing a completely new and unconventional strategy to improve the way data can be processed and – in particular – stored. Together with their partners at the Hebrew University of Jerusalem, they have been granted funding by the Carl Zeiss Foundation (CZS). The project of this interdisciplinary team is among a total of five projects – all at early stages and considered to be especially innovative – to be funded through the new CZS Wildcard program. The team members, based in Mainz and Jerusalem, have come up with the idea of bringing together two different forms of chirality to develop new data storage systems that are faster, smaller, and more efficient than those currently available.

Chirality, also known as handedness in this context, describes objects that come in two distinctly different configurations that are mirror images of each other such as our left and right hand.
“We were inspired by nature, where chirality is a common phenomenon. Chiral molecules can act like a filter for electron spin and ensure functionality even on the smallest scale,” said Professor Angela Wittmann of the JGU Institute of Physics, the spokesperson of the new HYMMS – Hybrid chiral Molecule-Magnetic Systems research project.

Combining the chirality of spin configurations and molecules

In their approach, the researchers from the fields of experimental solid state physics, atomic physics, and molecular chemistry will be using recently discovered chiral spin structures. These so-called skyrmions are tiny vortices in magnetic thin films protected by their chirality. It is this kind of chiral magnetic texture that the researchers intend to combine with chiral molecules over the course of the project. The assumption is that, based on the chiral-chiral interaction, they would have a unique, flexible, controllable, and efficient means of manipulating spin structures.

“With the help of a chiral molecule, it should be possible to switch the handedness of the chiral magnetic textures in thin films, for instance, from clockwise to anticlockwise,” clarified Wittmann. In this case, the chiral molecule with its DNA-like helix structure would act like a spin filter, allowing only certain electrons moving in one direction to pass while holding others back. The researchers will use highly sophisticated sensor technologies to determine how and whether this interaction actually works.

“Our project is groundbreaking in that it brings together two different types of chirality,” emphasized Wittmann. According to the researchers, there is a very real chance that their innovative concept involving the utilization of spintronic components will result in the creation of the next generation of innovative storage, logic, and sensor devices that could be employed in unconventional computing.

The consortium consists of four members of Johannes Gutenberg University Mainz and two members of the Hebrew University of Jerusalem, who will be contributing their expertise in various disciplines. At JGU, these are Professor Angela Wittmann and Professor Mathias Kläui of the Condensed Matter Physics group, Professor Dmitry Budker of the Quantum, Atomic, and Neutron Physics group and the Helmholtz Institute Mainz (HIM), and Professor Eva Rentschler of the Department of Chemistry, collaborating with their partners Professor Yossi Paltiel and Professor Nir Bar-Gill of the Department of Applied Physics at the Hebrew University of Jerusalem.

In a study published in Nature (“Functional CeOx nanoglues for robust atomically dispersed catalysts”), a research team led by Prof. ZENG Jie from the University of Science and Technology of China (USTC) of the Chinese Academy of Sciences and international collaborators developed a novel “nanoglue” strategy to stabilize atomically dispersed metal catalysts.