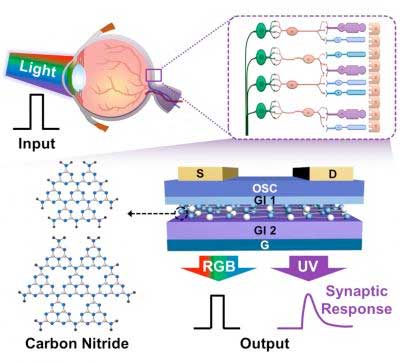 Researchers at Seoul National University and Inha University in South Korea developed photo-sensitive artificial nerves that emulated functions of a retina by using 2-dimensional carbon nitride (C3N4) nanodot materials.
Further, through the photo-sensitive artificial nerves which selectively detected ultraviolet (UV) light and processed the information, smart window platform was demonstrated for in-situ modulation of exposure to UV rays depending on the degree of UV exposure and risk.
Neuromorphic electronics which emulate the biological nervous systems are promising candidates to overcome the challenges of von-Neurmann computing architecture such as energy efficiency, high-density integration, and data processing rate in the field of Artificial Intelligence (AI) and Internet of Things (IoT).
Particularly, photo-sensitive neuromorphic electronics are regarded as core technology for application of next-generation smart sensors, because they can efficiently replicate the functions of biological synapses (interconnection between two neurons, key roles in learning and memorizing) and detect various types of external light information.
However, previous investigations were only focused on the integration of light sensing and synaptic functions in a single device, so actual applications have not been explored.
The work reported in Advanced Materials (“Retina-Inspired Carbon Nitride-Based Photonic Synapses for Selective Detection of UV Light”) describes retina-inspired photo-sensitive neuromorphic devices by using ultraviolet (UV)-responsive 2-dimensional carbon nitride nanodot layers to selectively detect and process UV exposure information.
UV light (wavelength from 10 to 400 nm) is harmful to human health, but the human retina cannot detect UV. Thus, by emulating the retina, photo-sensitive neuromorphic electronics that can selectively detect and process UV stimuli would expand the human visual sense beyond visible light and be applicable to healthcare devices.
The research group synthesized C3N4 nanodots dominantly absorbing UV light, and this was introduced as a UV-responsive floating-gate layer in transistor geometry. The presented devices consumed only 18.06 fJ/synaptic event, which is comparable to the energy consumption of biological synapses.
Furthermore, the research team at Seoul National University demonstrated in-situ modulation of exposure to UV light by integrating the devices with UV transmittance modulators. These smart systems would be further developed to combine detection and dose-calculation to determine how and when to decrease UV transmittance for preventive health care.
Professor Tae-Woo Lee, a professor at Seoul National University said “This smart system platform will be widely applicable to advanced electronic skin that is able to automatically adapt to the changing light-dose environment, smart windows that can selectively control transmittance of strong UV lights, smart glasses that detect and block harmful UV rays, smart sensors, artificial retina for soft humanoid robots, and neural prostheses compatible with biological optic nerves.” Lee said, “The development of human-like robots, neural prostheses that replicate and expand the human sense, and preventive health care devices can benefit from our work.”
Source: Seoul National University

This paper presents a review of Ion Beam Technology. In this review the main applications and advantages of using Ion Beam technology for deposition processes when compared to technology such as plasma or evaporation (PVD) will be presented. To start with, an overview of how an ion beam is generated will be described. This will then be followed by a presentation and discussion of some advantageous applications of ion beam technology.

Read more
[Nanotechnology] – Graphene: The more you bend it, the softer it gets 26 November 2019

New research by engineers at the University of Illinois combines atomic-scale experimentation with computer modeling to determine how much energy it takes to bend multilayer graphene – a question that has eluded scientists since graphene was first isolated. The findings are reported in the journal Nature Materials.