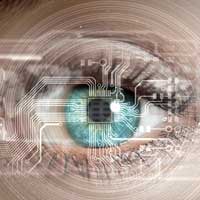 It is another unwelcome sign of middle age: you squint when reading a book up close or hold it farther away just to make out the text.
Bi-focal glasses are the traditional answer and while these make reading easier, they can change the way you judge distance and depth, causing blurry vision, headaches, nausea and even balance problems.
The EU-funded STRETCHLENS project has contributed to a more advanced solution with possibly major medical benefits. It developed an electrically powered contact lens that has the potential to diagnose and treat age-related reading difficulties while also helping with more serious disorders such as iris perforation and hypersensitivity to light.
Moreover, the lens is comfortable to wear and brings researchers closer to producing a disposable contact that detects visual ailments and releases drugs into the eye to treat them.
‘Recent developments make it possible to integrate liquid crystal cells into a contact lens with a view to correcting vision,’ says STRETCHLENS project researcher Andrés Vásquez Quintero of the Interuniversitair Micro-Electronica Centrum (IMEC) in Belgium. ‘We’ve taken this further by creating a platform that integrates electro-optic capabilities and biomarking sensing that can identify some types of cancer cells.’
Stretching boundaries
The STRETCHLENS team integrated an LED into the platform, as well as an ultra-thin silicon microchip and an antenna that uses radiofrequencies to wirelessly transfer energy.
Then, in a first for the industry, the researchers collaborated with the Japanese contact lens maker SEED to insert the electronics into a lens made from the same material as traditional contacts: hydrogel.
While technically sophisticated, advances in stretchable electronics mean that the lens easily accommodates the eye’s shape so that users can put it on and remove it without causing damage. The lightweight electrical structure opens the door for a disposable, mass-manufactured product.
To bring this closer to commercialisation, efforts are underway to extend the lens’ power autonomy while making the electronics more compatible with stretchable systems. The aim is to create a disposable device that tests for disease and releases drugs to treat eye disorders. These include aniridia, involving the complete or partial absence of a person’s iris that can cause increased light sensitivity, and colomba, a condition in which tissue in or around the eye is missing.
Achieving a high level of flexibility was one of the project’s key challenges. The team at IMEC worked for a number of years in a clean, dust-free zone. As the researchers were dealing with electronics that are less than half the width of a human hair, one speck of dust could have disrupted the whole process.
They began with stretchable non-conventional 2D electrical interconnections and, with the help of advanced thermoforming techniques, transformed these into a 3D spherical cap. They also developed functionality allowing the system to actively sense environmental light conditions.
Looking beyond lenses
The lens itself represents a clear advance and its fabrication techniques open a variety of opportunities in fields such as biomaterial science and stretchable micromechanics.
Vásquez Quintero believes it should be possible to apply the technology to implants for the brain, the heart and other body parts.
‘If the prototypes are further validated, for instance through clinical trials, the benefit to patients would be enormous,’ he says. ‘Additionally, the intellectual property (IP) developed could be used for start-up creation or licensing to other existing companies.’
He adds that flexible and stretchable electronics could be integrated into intelligent clothing and hold a lot of promise for other medical applications.
‘The integration of an LED light in a semi-passive wireless platform is the first important step towards a device that will change the life of many,’ he says.
Source: European Commission

Scientists at the University of Groningen used a silver sawtooth nanoslit array to produce valley-coherent photoluminescence in two-dimensional tungsten disulfide flakes at room temperature.
Until now, this could only be achieved at very low temperatures. Coherent light can be used to store or transfer information in quantum electronics. This plasmon-exciton hybrid device is promising for use in integrated nanophotonics (light-based electronics).