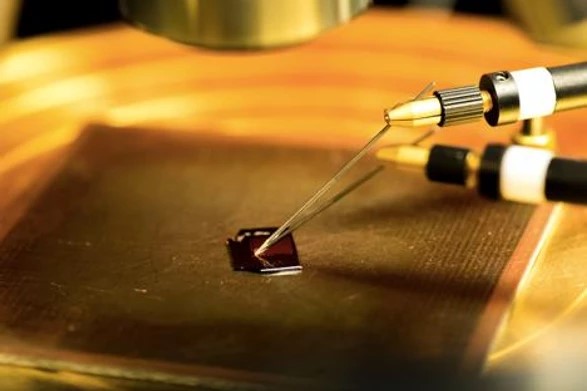 Single-wall carbon nanotubes (SWCNT) have found many uses in electronics and new touch screen devices. Carbon nanotubes are sheets of one atom-thick layer of graphene rolled up seamlessly into different sizes and shapes. To be able to use them in commercial products like transparent transistors for phone screens, researchers need to be able to easily test nanotubes for their materials properties, and the new method helps with this.

Fabricating single carbon nanotube transistors is usually tedious. It often takes days from raw carbon nanotube material to transistors, and the devices were contaminated with processing chemicals, degrading their performance. However the new method makes it possible to fabricate hundreds of individual carbon nanotube devices within 3 hours, an over ten times increase in efficiency.

Most importantly, these fabricated devices do not contain degrading processing chemicals on their surface. These so-called ultra-clean devices have been previously even more difficult to manufacture than regular single carbon nanotube transistors.

‘These clean devices help us to measure the intrinsic material properties. And the large number of devices helps to get a more systematic understanding of the nanomaterials, rather than just a few data points.’ says Dr. Nan Wei, a postdoctoral researcher in the group.

This study shows the aerosol-based nanotubes are superb in terms of their electronic quality, their ability to conduct electricity is almost as good as theoretically possible for SWCNTs.

More importantly, the new method can also contribute to applied research. One example is that by studying the conducting property of SWCNT bundle transistors, scientists may find ways to improve performance of flexible conductive films. This could prove useful for designers trying to build flexible, smash-proof phones. Follow-up work by the groups in Japan and Finland is already underway.

It’s no secret that from a population and economic perspective, China is one of the modern-day superpowers, and its influence is likely to increase in the coming years. As it stands, China’s population is the largest in the world and its economy has been growing by about 10% year on year for the last 40 years—most have which has been due to advances and innovations in the technology and manufacturing spaces. The benefits of this economic growth can also be seen in some of the societal impacts, such as an increased life expectancy. However, there are downsides to these advancements, with one of the biggest disadvantages being a significant increase in carbon dioxide emissions—and a subsequent negative impact on global warming and climate change.