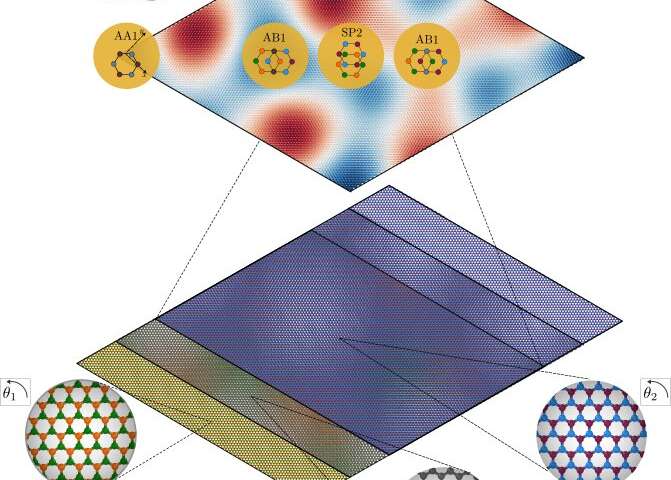 Researchers at the University of Antwerp report how higher-order periodic modulations called supermoiré caused by the encapsulation of graphene between hexagonal boron nitride affect the electronic and structural properties of graphene, as revealed in three recent independent experiments.
High-quality graphene samples are of high importance for obtaining and exploiting its theoretically described properties. Using an adequate substrate reduces the corrugation and improves otherwise disorder-limited properties of graphene. Hexagonal boron nitride (hBN) is a particularly good choice, since it perfectly preserves the graphene structure while providing a flat insulating surface.
Still, this applies only if the two monolayers are misaligned. Otherwise, the van der Waals interaction induces structural relaxation on the scale of the moiré pattern formed between the two layers and modifies the electronic properties due to the periodic moiré perturbation. Similar arguments apply if graphene is encapsulated and closely aligned to two hBN layers. In this case, the effect is enhanced since both layers are expected to contribute. Furthermore, close alignment on the order of 0.5 degrees between the layers is responsible for the appearance of a new form of periodic supermoiré modulation, which alters graphene on a larger spatial scale but smaller energy scale. Recent experimental observations of such effects are a consequence of significant improvements in experimental manipulation techniques, and among others, the possibility to rotate individual layers with high precision (Wang et al. 2019a; Wang et al. 2019b; Finney et al. 2019).
In their paper published on Jan 21st in Nano Letters, Anđelković et al. reveal under which condition the supermoiré effect appears, and how it alters the structural and electronic properties of graphene. They show, starting from a rigid hBN/graphene/hBN heterostructure, how the supermoiré appears as a simple geometrical consideration. Furthermore, they prove that relaxation effects in the three layers are expected to enhance the effects on the electronic band structure. The supermoiré-induced modifications are significant: New, low-energy, flat sub-bands and Dirac points appear, with a strong effect on electronic transport properties. In most configurations, the Dirac points are gapped, while flat bands are expected to enhance electron-electron correlations. “These new twisting degrees of freedom in heterostructures are opening up new fundamental research directions in graphene, where strong electronic correlations are expected to complement the already superlative properties of graphene,” said Dr. Lucian Covaci.
“The set of multi-scale numerical simulations developed by the University of Antwerp team allows for more realistic models, which will in turn allow for a more direct comparison with experimental observations,” said Dr. Miša Anđelković, a co-developer of Pybinding, the tight-binding open source software that made the simulations possible.
With a new light shed on the understanding of more complex and interfering behaviour of van der Waals heterostructures it is possible to finely tune graphene’s electronic properties and reach regimes where twist induced phenomena, such as flat bands or the appearance of mini-gaps, reveal themselves more clearly.

Hokkaido University researchers have devised a unique approach for making nanosized semiconductors on a metal surface. The details of the method were reported in the journal Nano Letters (“Localized ZnO Growth on a Gold Nanoantenna by Plasmon-Assisted Hydrothermal Synthesis”) and could further research into the fabrication of nanosized light and energy emitters.