his paper presents a review of Ion Beam Technology. In this review the main applications and advantages of using Ion Beam technology for deposition processes when compared to technology such as plasma or evaporation (PVD) will be presented. To start with, an overview of how an ion beam is generated will be described. This will then be followed by a presentation and discussion of some advantageous applications of ion beam technology.
What is an Ion Beam Source?
Essentially, an ion beam source is a plasma source fitted with a set of grids enabling a stream of ions to be extracted. Our ion beam source has the following three main parts: the discharge chamber, the grids and the neutraliser.
Ions are produced in the discharge chamber by subjecting a gas (usually Argon) to an RF field. The gas is fed into a quartz or alumina chamber with an RF powered coil antenna around it. The RF field excites free electrons until they have enough energy to break gas atoms into ions and electrons; this is referred to as “inductive coupling“. The gas is thus ionized and a plasma is established. The end-to-end RF voltage on the antenna can reach high values. The effect of this voltage on the ions can be an electrostatic force that will create highly energised ions. Although this effect would make the ion source easy to start, these ions will erode the ion source by sputtering, damaging it and creating contamination in the process; this is referred to as “capacitive coupling”.
Ion Beam Sources
In ion source, capacitive coupling is suppressed by placing an electrostatic shield inside the quartz chamber to allow only the RF magnetic component to transfer energy to the gas atoms. The electrostatic shield prevents the electric field, generated across the coil of the RF antenna, from entering the ion source. It also helps to break up any continuous conducting coating from depositing on the inside of the quartz plasma tube which could screen and reduce the plasma generation efficiency of the RF power.
Grids
The role of the grids is essentially to accelerate ions with a high velocity. Typically, grid sets are made of two or three grids (see Figure 1a). The grids have a specific hole pattern with numerous apertures; it is the combination of all the individual beamlets that form the beam. Inter-grid separation and grid curvature are also important depending on the application required, for example depending on the target size to be sputtered or deposition rate.
Ion source produces a low temperature plasma with slow (cold) ions (<1eV) which can be extracted from the ion source via the grids with a well-defined energy, and which do not cause any significant erosion of the grid structure. Considering a three grids system, a specific applied potential difference or voltage across the grids provides the driving force for the ions. The inner grid in contact with the plasma, called “screen grid”, is the one that sets beam voltage or energy. This is set at a positive potential relative to ground. Once through the screen grid holes, a negative potential relative to ground and hence far more negative relative to the screen grid is used to accelerate the ions. The total potential difference represents the extraction voltage for the beam. The third “decelerator” grid is usually grounded and helps beam collimation (reduces divergence of the beam), suppresses electron back-streaming and reduces redeposition of sputtered material back onto the accelerator grid and inside the source. This in turn increases the period between down times for grid cleaning and also makes grids cleaning easier. The final energy of the extracted ions is equal to the set beam energy(VB) (see Figure 1b). 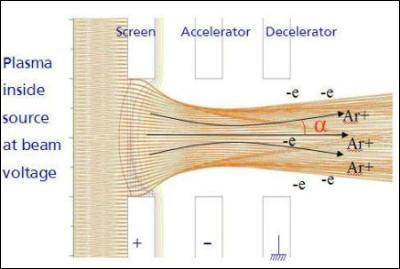 Neutralisers
Finally, the third element constituting ion source is a neutraliser, which is basically an electron source that balances the charge of the ions in the beam so as to reduce space-charge effects causing beam divergence through mutual repulsion of the ions and in order to prevent charging of the illuminated wafer or target. Generally, more electrons are emitted from the neutraliser than ions from the source, however these do not usually directly combine with the ion stream to form neutral atoms. Beam divergence is a function of many parameters, VB(beam voltage), IB(beam Current), VA(accelerator voltage), IN(neutraliser current), etc. and is also affected by gas scattering depending on the chamber pressure, which is one reason to keep the chamber pressure as low as possible. The interaction is complex and optimisation is a process of balancing the various parameters until the desired result is obtained.
Basic Dual Ion Beam Sputtering Chamber Set Up
The basic DIBS (Dual Ion Beam Sputtering) chamber set up, comprises a deposition source that accurately focuses a neutralised ion beam onto a target with minimal overspill so as to avoid contamination of depositing films. This enables materials such as Au, Cr, Ti, Pt for metal tracks, magnetic materials such as Fe, Co, Ni, etc. or dielectrics such as SiO2, Al2O3, etc. to be deposited (the list is non-exhaustive).
It also comprises an assist/etch source that can fulfil various functions: it can be used to etch (or ion mill) the substrate; it can provide “assistance” to the deposition process by bombarding the depositing film with energetic ions which can improve or modify the film properties or stoichiometry by physical and/or chemical effects; it can also be used as a low-energy pre-clean of the substrate prior to deposition. Sometimes, this source is used without grids as a plasma source of ‘thermal’ activated radicals for chemical modification of the depositing material while minimising physical bombardment of the substrate.
The Ionfab tool can also be supplied with only one or other of the above ion sources, either for deposition where assist or etch is not required for the process, or as an etching/milling/surface modification tool where no deposition is required.
Deposition of Materials Using Ion Beam Deposition
Some of the most common materials deposited are oxides such as Al2O3, Ta2O5, SiO2 and TiO2 (usually from Al2O3, Ta, Si, SiO2 and Ti targets and with O2 added to the process gas). Indeed, O2 can be introduced either directly into the chamber or through the deposition and/or the assist source; this allows stoichiometric dielectrics to be deposited either from a stochiometric dielectric target, where oxygen depletion during sputtering is replaced, or from a metal target in reactive mode where the sputtered metal atoms are oxidized at some point which could be on the target, during transit to the substrate or on the substrate if an oxygen-bearing assist beam or plasma is used. The second source can also be used for substrate pre-clean to, for example, achieve improved adhesion of the films or remove native oxides, or as a physical assist during deposition to further densify the films.
The same can be done for nitride deposition, e.g. Si3N4 using a Si3N4 target and N2 in the chamber or assist source. Other, more ‘exotic’, materials, such as MgF2, LaF3, Nb2O5, ZrO3, Y2O3, HfO2 YF3 etc., may also be deposited by (reactive and/or assisted) ion beam sputtering and the list includes such material as VOX that requires extremely precise control of process gas ratios to allow very specific thermo-electrical properties to be achieved for sensitive thermal imaging applications.
Controlling Properties and Growth of Films
Deposition tool also allows the substrate to be rotated and inclined relative to the sputter flux direction enabling further ‘tuning’ of film growth/properties as well as step coverage control for deposition onto surface topology. Deposition rates will be lower than evaporation, but this does allow much more control with a much more reproducible and predictable deposition rate allowing very precise thickness control simply by timing. The material is also sputtered and deposited in a much lower temperature environment than evaporation. The actual substrate temperature can thus be kept very low during processing using the helium fed back-side cooling capability.
Ion Beam Deposition and Low Pressure Environments
Ion beam deposition runs in a much lower pressure environment (in the 10-4 Torr range or lower) than standard magnetron sputtering, so any sputter gas (e.g. Ar) inclusion in the film is much less of a problem (as is also true for evaporation). The mean free path of ions and sputtered material is accordingly greatly increased which also inhibits thermalisation of sputtered material as well, resulting in depositing atom kinetic energies (typically between 1 to 100 eV) much higher than, for example, in the case of evaporated atoms,.
Ion Beam Deposition and Surface Pre-Clean and Film Stress Control
Since substrate preparation and/or film stress are usually the cause of problems in adhesion for thicker films, ion beam deposition can provide both surface pre-clean and film stress control by the second ion source. Moreover, ion beam deposition does not suffer from the problem of ‘spitting’ often seen in evaporation.
The Quality of Ion Beam Deposited Films
The deposited film qualities may be divided into optical and mechanical categories:
Optical properties of a thin film are characterized by the following qualities:
Transmittance (associated with dispersive values and homogeneity)
Absorption (associated with transparency properties)
Scatter (associated with surface roughness and volume defects)
Ion beam optical coaters give good scatter loss results thanks to smooth film deposition. Figure 3 below shows some examples of single oxide layers of SiO2 and TiO2 on Si wafer. A surface roughness of 0.22nm rms for Si3N4 deposited on a Si wafer has also been measured. 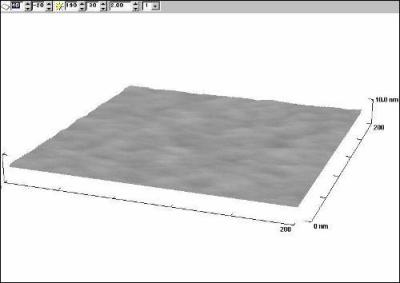 Reliability and Reproducibility of Ion Beam Deposition
However, in addition to excellent film smoothness, the ion beam tool must have reliable and reproducible sources if the same results are to be obtained for the next film to be deposited. Both film thickness and refractive index reproducibility are very important when depositing multilayer coatings.
In Figure 4 below is shown Ta2O5 deposition over three consecutive runs measured over an 8” wafer deposited on a Si wafer. Figure 5 shows the corresponding refractive index repeatability obtained over the same three consecutive deposition runs. Figure 6 shows an example of Si3N4 deposition uniformity over 100mm on Si wafer with a ±0.1% refractive index uniformity. Figure 7 shows an example of SiO2 deposition uniformity over 200mm on Si wafer with better than ±0.1% refractive index uniformity with 5mm edge exclusion. It can be observed that the different profile of the curve compared to Ta2O5 deposition is linked with the different platen positioning and beam parameters that affect beam divergence. 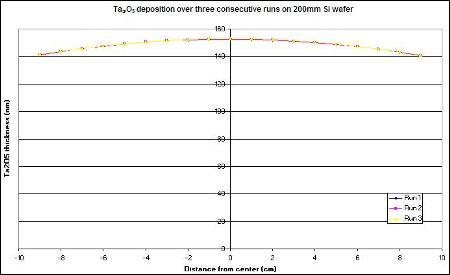 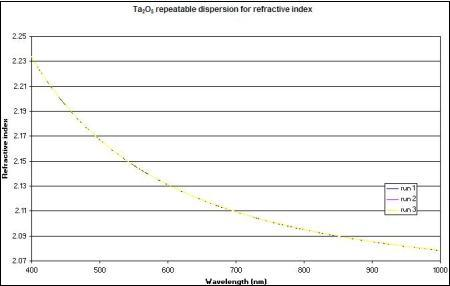 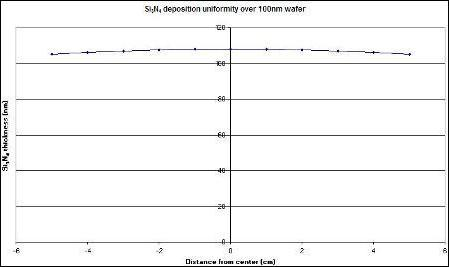 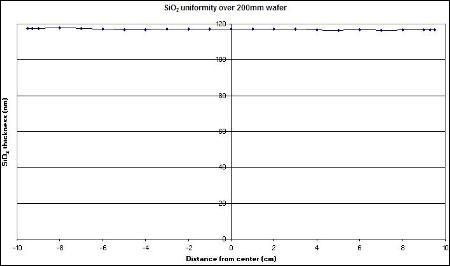 A major goal in nanomedicine is to make nanoparticles with the capability of in vivo targeting for both imaging and delivery of therapeutic biomolecules in the human body. One strategy to obtain a high targeting yield is to functionalize the surface of nanoparticles with targeting ligands – like antibodies or aptamers – that enhance the binding of …