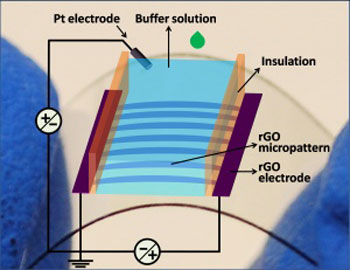 Thin film transistors (TFTs) made of carbon-based materials such as graphene are expected to transform many technological applications. In the detection of biomolecules and biological signals in cells, for example, their high flexibility facilitates measurements of three-dimensional structures, while their high transparency enhances optical observations. Current methods for the fabrication of graphene-based TFTs, however, are expensive and inefficient.

The unique thickness-dependent electrical properties of graphene make this material ideal for use as the metallic electrodes and semiconducting channels in TFTs. By opting for all-rGO transistors, Zhang’s team significantly lowered fabrication costs, and unlike existing graphene-containing TFTs, which often differ in quality from batch to batch, the rGO-based devices exhibited high reliability and reproducibility.

After depositing a graphene oxide film on a polymer substrate, the researchers formed two separate pads for the drain and source electrodes of the TFT. Next, they created microscopic graphene oxide patterns between these pads using soft lithography techniques to form the semiconducting channels. Chemical reduction with hydrazine then yielded the rGO components. The team finally insulated the electrodes and built a chamber for the electrolyte solution using silicone rubber (see image).

« Our device can undergo over 10,000 bending cycles without losing any conductance, making rGO one of the most suitable candidates for the scalable production of flexible electronics, » says Zhang. Devices with conventional gold/chromium electrodes generally fail after about 500 bending cycles.

The channels are also extremely sensitive to the local environment. Contact with biomolecules, for example, induces doping effects that alter the conductance of the TFT channel. « This change can easily be detected by monitoring the current of the transistor, » says Zhang. The researchers found that exposure to fibronectin caused a decrease in channel current at even nanomolar levels, while avidin caused an increase in current only when the channels had been modified with biotin.

« We are now looking into improving device performance in more complex environments, » says Zhang. The devices could conceivably be used in the sensing of cancer genes or virus antibodies.