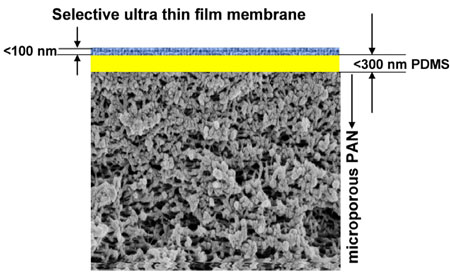 The burning of fossil fuels like coal and oil pumps billions of tons of greenhouse gases into the atmosphere annually, changing the world’s climate in the process. It is estimated that approximately one third of total world carbon dioxide emissions come from energy production in power plants. One possible option for reducing CO2 emissions from power plants is to capture them before they hit the atmosphere and store the gas underground. This technique is called Carbon Dioxide Capture and Storage.

However, before CO2 can be stored, it must be separated from the other waste gases resulting from combustion or industrial processes. Most current methods used for this type of filtration are expensive and require the use of chemicals. Nanotechnology techniques to fabricate nanoscale thin membranes could lead to new membrane technology that could change that.

Current membranes are in many cases not competitive for large scale applications, because their permeance (flux) for carbon dioxide is not high enough; state-of-the-art membranes exhibit a carbon dioxide permeance of about 0.3 m3 (STP) m-2 h-1 bar-1.

Reporting their findings in the September 1, 2010 issue of Nanotechnology (« Nanometric thin film membranes manufactured on square meter scale: ultra-thin films for CO2capture »), researchers from the Institute of Materials Research and Institute of Polymer Research, both at GKSS-Research Centre Geesthacht, have fabricated multiblock copolymers consisting of polyethylene oxide and polybutyleneterephtalate into thin-film composite membranes on laboratory and technical scales.

In order to manufacture their ultra-thin defect-free coatings with extremely high CO2permeance and high selectivity, the researchers used a highly permeable intermediate layer (PDMS; thickness <300 nm) between the microporous support and the selective coating. The highly permeable intermediate layer worked as a gutter and protective coating which prevents the diluted polymer solution penetration into the porous structure, and at the same time renders the entire membrane surface smoother.

To test the performance of their membranes, the GKSS researchers performed experiments with gas mixtures in order to evaluate the application in power plants. They found that their ultra-thin film membrane has roughly a 20 times higher CO2permeance than commercial membranes, combined with one of the highest CO2/N2-selectivities known (facilitated transport materials excluded).

According to the team, a preliminary technical and economical analysis shows that this membrane has potential for carbon capture in coal-fired power plants. They note that the capture cost using the conventional amine absorption process is in the range of 30-50 Euro per tonne recovered CO2.

By applying a membrane-based process design the separation costs can be lower than 30 Euro/t using the high permeance membrane developed at GKSS.

These membranes are currently under evaluation at pilot scale in a German project for CO2 capture in power plants.

Hokkaido University researchers have devised a unique approach for making nanosized semiconductors on a metal surface. The details of the method were reported in the journal Nano Letters (« Localized ZnO Growth on a Gold Nanoantenna by Plasmon-Assisted Hydrothermal Synthesis ») and could further research into the fabrication of nanosized light and energy emitters.