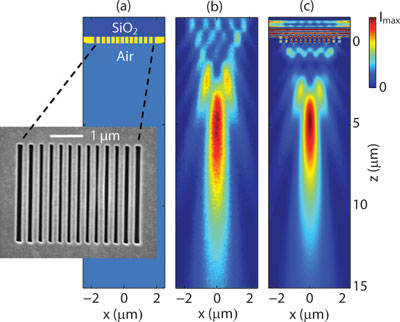 The development of electron-beam lithography, focused ion beam milling, and other nanotechnology fabrication techniques has provided researchers with great freedom to pattern metallic structures at the nanoscale. This has fueled the design and implementation of new ultracompact photonic devices based on the plasmonic behavior of metals. Plasmonics is an emerging field of nanophotonics that relies on hybrid light-charge density waves on metal-dielectric interfaces and holds the promise for control of light at dimensions much below the free-space wavelength of light.

Lenses have always been an important component for controlling light in optical systems. The miniaturization of lenses, for example, has been essential in the development of modern solid-state image sensors and can also have important implications for other opto-electronic applications such as displays, solid state lighting, and potentially solar cells. The focusing capability of conventional, dielectric-based microlenses however deteriorates as their physical dimensions are reduced toward a single-wavelength scale. That’s why scientists have begun exploring alternative approaches to refractive lensing.

While nano-patterning of optically thick metallic films was theoretically proposed as an alternative to refractive lensing, scientists at Stanford University have now reported the first experimental demonstration of far-field lensing using a plasmonic slit array. »What we show experimentally in our lab is the ability to exploit the plasmonic behavior of metals to create new ultra-compact photonic devices such as for instance a planar plasmonic far-field lens, » says Peter Catrysse. « This is now possible using nanofabrication techniques, such as focused ion beam milling. »

Catrysse, his joint first author Lieven Verslegers, and colleagues from Fan’s group worked with scientists from Mark Brongersma’s lab at Stanford’s Department of Materials Science and Engineering. Together, the team showed the first experimental demonstration of far-field light focusing by nano-patterned optically thick gold films – a crucial step in the realization of this potentially important technology for many applications in opto-electronics.

The planar lens structures that the Stanford team fabricated consist of an array of nanoscale slits in a 400 nm, optically thick gold film. The slits range in width from 80 nm at the center of the array to 150 nm on the side, are spaced 200 nm apart, and are 3 µm long.The structures are designed to operate as far-field lenses.

Catrysse explains that they fabricated the lenses in a two-step process: « First, a metal film is evaporated onto a fused silica substrate using electron beam evaporation. For the metal film, we opt for gold because it does not oxidize and has a good plasmonic response in the visible part of the electromagnetic spectrum, that is, the phase can be sufficiently modulated by varying slit width while losses are moderate. Next, we nanopattern the gold films by milling through the film using a dual-beam focused ion beam/scanning electron microscope. All slits of the arrays are milled in parallel to prevent metal redeposition. »

In this particular approach, the scientists have total control over the behavior of the device through the geometry that they pattern into the metal film. This enables them, for example, to design and implement planar microlenses that respond with on-axis focusing (focus is normal to and below the microlens) to an illumination beam that comes in at a steep angle.

« This is important in solid-state image sensors, for example, where scaling of the entire camera module results in very large off-axis angles of incidence for pixels that are located at the edges of the image sensor, » says Catrysse. « This results in a non-uniform pixel response to a uniform incident light field across the array. Conventional dielectric microlenses can not be shaped differently – with current technology – to account for the different off-axis angles that the different pixels experience. The solution is to have the microlenses shifted with respect to the pixel (by a different amount for every pixel). For very steep angles, ∼30 degrees, even this procedure starts to fail. With our technology, we can design lenses that will work for 30 degrees angle of incidence; and even larger angles if needed. »

The implementation of ultra-compact photonic devices using planar structures that can benefit from integration with existing semiconductor technologies is an important endeavor. This work shows explicitly how this can be done for a very basic optical component such as a far-field lens.

The design principles for the specific case of a lens, however, can also be applied to construct a wide range of optical components that rely on tailoring of the optical phase front. The Stanford scientists are pursuing some of those right now but they still need to overcome some hurdles.

« The challenges we face are in achieving even smaller features to further enhance the control that we have over the behavior of these structures and to optimize their performance, » says Catrysse.

Borophene is the name for atomically thin, two-dimensional (2D) sheets of boron. Whereas boron is a nonmetallic semiconductor in its bulk form, it becomes a metallic conductor in 2D, even at a thickness of only one atomic layer.