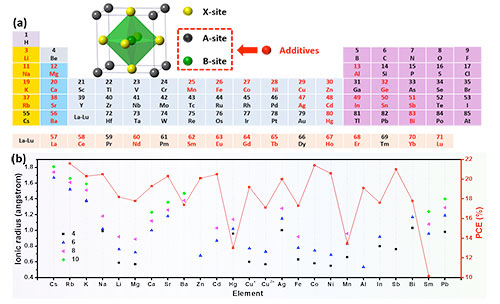 Additive engineering has been developed to optimize perovskite quality. All inorganic devices are becoming increasingly prominent according to the requirement of long-term stability. Consequently, inorganic additives of metal cations are more attractive because most of them can enter the bulk phase or adsorb/exchange at the surface to tune the photoelectrical properties.

The scientists discussed the metal cations for perovskite solar cells by focusing on the position of the cations in perovskites, the modulation of the film quality, and the influence on the photovoltaic performance. Metal cations were considered in the order of alkali cations, alkaline earth cations, then metal cations in the ds and d regions, and ultimately trivalent cations (p- and f-block metal cations) according to the periodic table of elements.

In addition, the effects of metal cations on the perovskite tolerability, film morphology, charge dynamics, crystal strain effect and stability were discussed systematically. Finally, the scientists highlighted the opportunities and challenges of metal cations in perovskite solar cells.

The Lyding Group recently developed a technique that can be used to build carbon-nanotube-based fibers by creating chemical crosslinks. The technique improves the electrical and mechanical properties of these materials.

One of the most promising alternative energy sources is hydrogen, which can be extracted from water and air. A catalyst is needed for a chemical process that releases hydrogen from an H2O molecule.