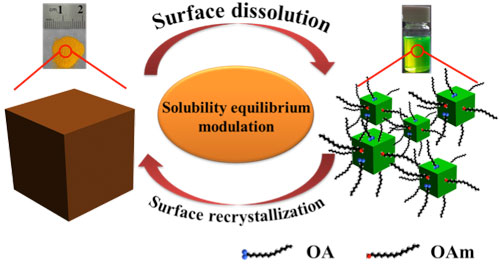 Although developed only recently, inorganic halide perovskite quantum dot systems have exhibited comparable and even better performances than traditional quantum dots in many fields. They are expected to be applied in display and lighting technologies.

However, before we’ll see widespread commercial applications there are a large number of basic problems to be studied.

Recently, a team of researchers from Nanjing University have reported an interesting cyclable surface dissolution and recrystallization phenomenon of inorganic perovskite crystals. This allows them to freely change size between nanometer and micrometer scales, and can be used to healing the defects inside perovskite films and hence improve the performances of optoelectronic devices.

This work, reported in the June 14, 2016 online edition of Advanced Functional Materials (« Healing All-Inorganic Perovskite Films via Recyclable Dissolution–Recyrstallization for Compact and Smooth Carrier Channels of Optoelectronic Devices with High Stability ») should be useful for the understanding of perovskite and for improving the performances of perovskite devices, including solar cells, photodetectors, and LEDs.

« We report on a room temperature recyclable size evolution and micro-self-healing behaviors of inorganic halide perovskites, which result from the surface dissolution and recrystallization of inorganic perovskites with the effect of surfactants and polar solvents, » Professor Haibo Zeng, Director of the Institute of Optoelectronics & Nanomaterials at Nanjing University of Science and Technology, tells Nanowerk. « These phenomena are intrinsic and universal for different perovskites prepared with different methods. »

These findings can be applied to build compact and smooth carrier channels for optoelectronic devices via self-healing at room temperature.

Photodetectors based on the treated perovskite film exhibit improved response (>700%), external quantum efficiency (>700%), response speed (1 and 1.8 ms for rise and decay time), and stability, which are better than most of the planar perovskite photodetectors.

« Different from the classical Cd-based quantum dots, surfactants are not tightly bound to the surface of IPQDs, but highly dynamic, » explains Zeng. « The surface diffusion coefficient reaches up to 166 µm2 s-1. When the surfactant disaffiliated from the surface of quantum dots, they will take away the surficial Cs+ and Pb2+ to maintain electrical neutrality, resulting in partial dissolution of the surface. Therefore, the size of the inorganic perovskite particles can be reversibly controlled between 10 nm-1 µm at room temperature under the influence of polar solvents and surfactant. »

« Particularly » he points out, « on one hand, when purified with a mixed solvent of toluene and ethanol, the IPQDs will gradually become larger and eventually reach equilibrium because the dissolved ion composites connect small particles as solder. On the other hand, when large particles are stirred in toluene with surfactants, they will become smaller gradually and eventually reach equilibrium. The highly dynamic surfactants diffuse from the surface with cations, resulting in gradual surface dissolution. »

According to these effects, the research team developed a room temperature film healing strategy for inorganic halide perovskites based on dissolution-recrystallization mechanism.

For example, compared to as-fabricated photodetectors, treated devices show improved response and detection and faster response speed. In addition, after continuous irradiation of high-intensity laser (442 nm) for 8 hours, there was only a decrease of 4.6% for photocurrent relative to the highest value while the untreated device shows a degradation of 34% after only 3.4 hours.

« Our work would provide good reference for researchers since the developed film modification strategy is facile and suitable for all kinds of inorganic halide perovskite devices, especially for solution processed flexible devices, » concludes Zeng.

Catalysis is the process of speeding up a chemical reaction; it’s very important for many technologies. Branched nanoparticles are one of the most promising catalysts.
Scientists can control their branch sizes and surfaces to make them more stable and more effective catalysts.