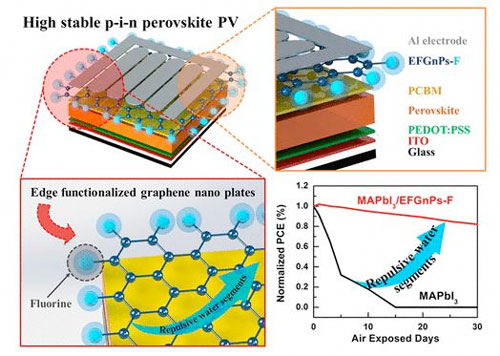 Perovskite solar cells (PSCs) have attracted more attention in the past few years, as the next-generation solar cells with the potential to surpass silicon cells’ efficiency. Nevertheless, stability and cost issues in PSCs seem to block further advancements toward commercialization.

The perovskite materials are easily decomposed in moisture conditions. They cannot survive even for one day without proper encapsulation and this results in low stability. To solve these issues and make progress toward the commercialization of PSCs, Professor Kim and his team introduced a highly stable p-i-n structure for PSCs using fluorine functionalized EFGnPs to fully cover the perovskite active layer and protect against the ingress of water for high-stability PSCs.

« Fluorocarbons, such as polytetrafluoroethylene (Teflon) are well-known for their superhydrophobic properties and comprise carbon fluorine (C-F) bonding, » says Professor Gwi-Hwan Kim at UNIST. « By substituting carbon for fluorine, we have created a two-dimensional material with high hydrophobicity, like Teflon. Then, applied it to PSCs.  »

The newly-developed perovskite solar cell device was fabricated using solution processes, a process that involves the coating perovskite materials on a flexible film. Using this process allows the future application of solar cells to wearable devices. The next-generation solar cells are advantageous in that they have a simple manufacturing process and a low manufacturing cost, compared the existing silicon-based inorganic electronic devices.

CVD is a well-known technique in the nanofabrication space known for being able to take a vaporized reactant and deposit it onto a surface to form a thin film. There are many thin films and nanomaterials which can be fabricated using CVD, with the most notable being graphene.

Around 185 m2 of Heliatek’s OPV films have been installed on a warehouse of inland port Duisburger Hafen.
With a total length of almost 600m, the largest organic photovoltaic façade installation so far has been installed in Germany using Heliatek’s HeliaSol film panels.