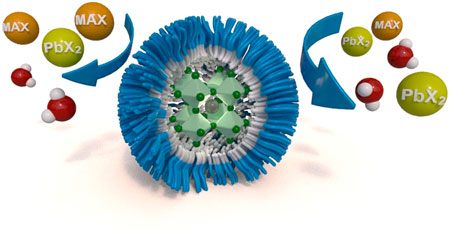 The main attractiveness of perovskite nanocrystals, which were first synthesized in 2014, is their high photoluminescence quantum yield and the possibility to tailor their emission wavelength by selecting the halide in the crystal structure. Numerous synthesis and processing innovations have delivered halide perovskite nanocrystal materials that have been tested in solar cells, solar concentrators, visible light communications, electroluminescent diodes, photodetectors, and photocatalysis.

« Despite recent achievements and a plethora of studies, perovskite nanocrystals still exhibit severe limitations for an unrestricted use in optoelectronic applications, » Prof. Dr. Alexander Urban, who leads the Nanospectroscopy Group at the Ludwig-Maximilians-University Munich, tells Nanowerk. « Akin to their bulk counterparts, the nanocrystals degrade due to external environmental influences such as humidity, heat and ultraviolet light illumination. »

Synthesizing the perovskite nanocrystals inside a protective polymer shell shields them from water degradation and halide ion migration yet still allows full control of their properties such as crystal size and emission wavelength.

Since energy transfer between the encapsulated nanocrystals is still possible, this technique allows for their incorporation into electronic devices.

« We showed that during our synthesis the precursor salts diffuse into the cores of the polymer micelles, where halide perovskite nanocrystals spontaneously crystallize, » notes Urban. « These exhibit strong photoluminescence as documented by quantum yields of up to 63%. »

« Notably » he adds, « the micellar-embedded nanocrystals are vastly superior to standard halide perovskites in terms of stability against humidity. »

During long-term testing, the team found that not only were nanocrystals films strongly emissive after more than 200 days of being exposed to ambient conditions but they also exhibited fluorescence after 75 days of complete submersion in water. Additionally, no halide ion migration occurred in these films.

« The excellent stability of the encapsulated nanocrystals combined with their ability to self-assemble in near-perfect films on substrates promises to enable the integration into optoelectronic devices, » Urban points out. « F?rster resonance energy transfer (FRET) between nanocrystals of varying bandgap with an extremely high efficiency highlights a possible avenue for realizing this. »

« We still need to study the exact formation mechanisms and the specific roles of the polymer components as well as how to enable and optimize charge and/or energy transfer, » he concludes. « Nevertheless, we hope that our proposed synthesis technique significantly advances perovskite-based optoelectronics. Furthermore, block copolymers should enable subsequent nanopatterning of thin-films through photolithography and e-beam illumination, greatly expanding the range of possible device structures. »