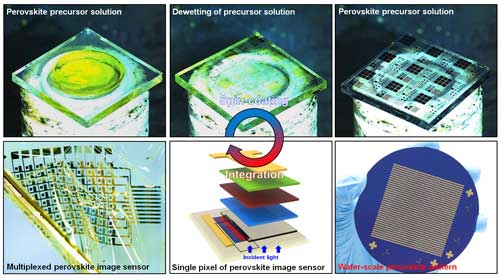 Perovskite materials have attracted great attention in the fields of optoelectronics due to their significant optoelectronic properties. So far, the applications of perovskite thin-films have been limited to solar cells because the required high-definition patterning for optoelectronic devices hadn’t been achieved yet.

Now, though, researchers in Korea have realized a high-resolution spin-on-patterning (SoP) process for the fabrication of optoelectronic devices arrays such as image sensors.

In order to solve this problem, Kim’s team observed and analyzed the intermediate steps of patterning perovskite with fast-speed cameras and subsequently optimized their SoP process.

Briefly, a densely packed hydrophobic self-assembled monolayer (SAM) is deposited on the hydrophilic oxide substrate. The photoresist is spin-coated and patterned. The photoresist-patterned oxide substrate is then treated with oxygen plasma using a reactive ion etcher to remove the SAM selectively, expose the oxide, and make that region hydrophilic. The removal of the photoresist leads to a patterned substrate with different surface energies (hydrophilic oxide region and hydrophobic SAM-modified region). Then, iii) the solution of perovskite precursors is spin-coated, which forms a thin solution film. Finally, the patterned solid-state perovskite film is obtained by thermal annealing.

The team notes that their SoP process is compatible with almost every spin-coated perovskite material and deposition technique (e.g., mixed-precursor, two-step, hot-casting, and solvent-engineering) as well as microfabrication processes used in the industry for mass production of multiplexed image sensor arrays. As such it can be applied to high-performance, ultrathin, and deformable optoelectronic device arrays.

However, large-scale fabrication with uniform pattern is crucial to commercializing perovskite optoelectronics. Although the researchers showed that wafer-scale fabrication is possible by using the SoP process, uniform patterns are not achieved (because the uniformity of the spin-coating process decreases with the increase of the number of pixels in the array). This problem will be addressed by future work.

A growing demand for smart fabrics in different fields that not only serves traditional requirements of protection, safety, fashion, and convenience but also can adjust themselves according to the exterior environment has encouraged textile industries to work on next-generation smart fabrics.