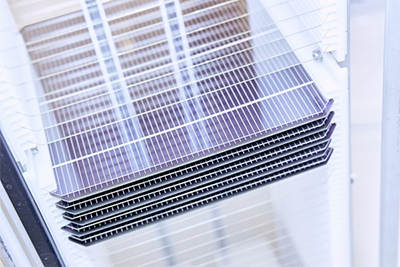 Many countries around the world are committed to reducing emissions or reaching net-zero emissions to meet the United Nations’ climate goals of maintaining temperature increases below 1.5 degrees Celsius by 2050. Renewable energy technologies, particularly solar energy panels, will play a significant role in achieving these goal.

To fully harness the potential of sunlight — the world’s most abundant energy resource — scientists have been trying for decades to maximize the amount of energy that can be extracted from the sun.

« We identified perovskites as the perfect partner for a tandem system with silicon, » said author Laura Miranda Pérez.

From a materials perspective, perovskites fulfill all the optoelectronic requirements for a photovoltaic cell, and they can be manufactured using existing processes. These features make perovskite a perfect plug-and-play addition to silicon technology as it can be deposited as a layer onto a conventional silicon solar cell.

« We’re proving the potential of perovskite-on-silicon tandem technology through the continuous achievement of world-record efficiencies, with our current record at 29.52%, » said Miranda Pérez.

The elemental composition of the perovskite material is readily available within existing supply chains, providing a clear pathway to scale up the technology quickly to meet the ambitious solar energy targets needed to tackle climate change. Also, the higher power output of perovskite-on-silicon tandem cells could offset the carbon footprint embodied in the production of high-purity silicon required for photovoltaic cells.

Consequently, the researchers found adding perovskite onto existing silicon photovoltaics is the fastest way to improve silicon performance as it bypasses the industry disruptions associated with the introduction of a brand-new technology. The researchers focused on tandem solar cells for seven years, and the group is now very close to starting mass commercial production in its factory in Brandenburg, Germany.

« We want to help people understand the huge potential of perovskite-on-silicon tandem technology to boost the efficiency of solar installations and to help the world reach the goal of providing sustainable energy for all, » said Miranda Pérez.