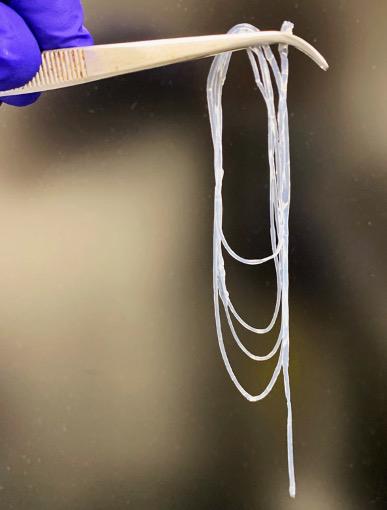 Glass is one of the oldest manufactured materials used by humans and glass making dates back at least 6000 years, long before humans had discovered how to smelt iron. Glasses have been based on the chemical compound silica – silicon dioxide, or quartz – the primary constituent of sand. Soda-lime glass, containing around 70% silica, accounts for around 90% of manufactured glass.

Historically, we are familiar with glasses’ decorative use or as window panes, household items, and in optics such as eyeglasses, microscopes and telescopes. More recently, starting in the 1950s, glass has been used in the manufacture of fiber optic cables, a technology that has revolutionized the communications industry and helped ring in the digital revolution.

Fiber optic cables propagate a signal as a pulse of light along a transparent medium, usually glass. This is not only used to transmit information but, for instance in many healthcare and biomedical applications, scientists use optical fibers for sensing applications by shining light into a sample and evaluating the absorbed or transmitted light.

A recent development in this field is optogenetics, a neuromodulation method that uses activation or deactivation of brain cells by illumination with different colors of light in order to treat brain disorders.

Since silica fibers have limited biocompatibility, are not biodegradable, and thus are not very suitable for fields such as optogenetics, researchers have used hydrogelsinstead to fabricate optical fibers. Hydrogels are composed mostly of water, which is a good light conductor in air media. These light-guiding hydrogels were shown capable of integrating tissues, stimulating cells, and sensing varied phenomena.

« The problem with hydrogel optical fibers is that once they are fabricated, they can’t be modified, as they are ‘cooked’ using UV light to make permanent bonds of the materials, » Carlos Guimarães, the paper’s first author, tells Nanowerk. « We addressed this issue with an interdisciplinary approach that integrates optics, bioengineering, and nanotechnology to make a living optical fiber with many applications, including cancer models, physical force sensing, and covid detection, among others. »

The research team, which includes scientists from the 3B’s Research Group(Biomaterials, Biodegradables and Biomimetics) at the University of Minho in Portugal, and members from the Bio-Acoustic MEMS in Medicine Labs (BAMM) laboratory at at the Canary Center for Early Cancer Detection under the Department of Radiology at The Stanford University School of Medicine, published their findings in Advanced Materials.

The electronic behavior of thin films is heavily influenced by the contact with their surroundings, as exemplified by the recent discovery of 2D superconductivity at a thin film interface. However, information about how such entwined states come into existence is limited by the lack of tools capable of visualizing such buried interfaces.