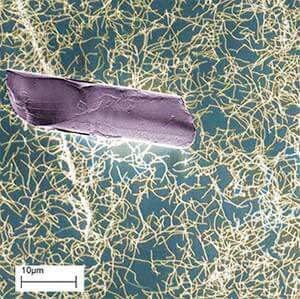 Carbon nanotubes (CNTs) are cylindrical molecules that consist of rolled-up sheets of single-layer carbon atoms (graphene). They can be single-walled (SWCNT) with a diameter of less than 1 nanometer (nm) or multi-walled (MWCNT), consisting of several concentrically interlinked nanotubes, with diameters reaching more than 100 nm. Their length can reach several micrometers or even millimeters.

Like their building block graphene (Why not read our extensive tutorial on graphene – which includes a fantastic infographic), CNTs are chemically bonded with sp2 bonds, an extremely strong form of molecular interaction.

Carbon is the fourth-most-abundant element in the universe and, depending on the arrangements of carbon atoms, takes on a wide variety of forms, called allotropes. Carbon allotropes exhibit unique properties of strength and electrical conductivity.

Solid carbon at room temperature has two classical structures: diamond and graphite. In 1985 the discovery of the existence of a third and new carbon allotrope containing sixty perfectly symmetrically arranged carbon atoms (also known as C60, fullerene, or buckyballs) meant a major breakthrough and opened a novel field of carbon nanochemistry. Then, in 1991, carbon nanotubes were discovered and graphene in 2004.

The rolling-up direction (rolling-up or chiral vector) of the graphene layers determines the electrical properties of the nanotubes. Chirality describes the angle of the nanotube’s hexagonal carbon-atom lattice.

Armchair nanotubes – so called because of the armchair-like shape of their edges – have identical chiral indices and are highly desired for their perfect conductivity. They are unlike zigzag nanotubes, which may be semiconductors. Turning a graphene sheet a mere 30 degrees will change the nanotube it forms from armchair to zigzag or vice versa.

While MWCNTs are always conducting and achieve at least the same level of conductivity as metals, SWCNTs’ conductivity depends on their chiral vector: they can behave like a metal and be electrically conducting; display the properties of a semi-conductor; or be non-conducting. For example, a slight change in the pitch of the helicity can transform the tube from a metal into a large-gap semiconductor.

Apart from their electrical properties, which they inherit from graphene, CNTs also have unique thermal and mechanical properties that make them intriguing for the development of new materials:

Please note that carbon nanotubes are different than carbon nanofibers (CNFs). CNFs are usually several micrometers long and have a diameter of about 200 nm. Carbon fibers have been used for decades to strengthen compound but they do not have the same lattice structure as CNTs. Instead, they consist of a combination of several forms of carbon and/or several layers of graphite, which are stacked at various angles on amorphous carbon (where atoms do not arrange themselves in ordered structures). CNFs have similar properties as CNTs, but their tensile strength is lower owing to their variable structure and they are not hollow inside.