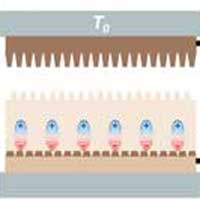 Static electricity shock which occurs more often in winter is unpleasant. When two different objects are in repeated contact, it causes friction which then creates static electricity.
This can be found easily in our everyday actions and it is very annoying even between the lovers. In fact, there is no electric current flowing in static electricity but tens of thousands of volts occurs, equal to the power of lightening. Then, can we collect static electricity for use? The answer is yes.
Prof. Dong Sung Kim and his PhD candidate student, Donghyeon Yoo from POSTECH Mechanical Engineering Department and Prof. Jae-Yoon Sim and his PhD student Seoulmin Lee from POSTECH Department of Electronic and Electrical Engineering jointly with the research teams of Prof. Woonbong Hwang of POSTECH and Dongwhi Choi of Kyung Hee University developed a new technology to increase the total amount of energy generated by a ‘triboelectric nanogenerator’ which can converts static electricity into power.
In the meantime, they also succeeded in developing an integrated circuit that makes this energy into practical electric energy (Nano Energy, « Reliable DC voltage generation based on the enhanced performance triboelectric nanogenerator fabricated by nanoimprinting-poling process and an optimized high efficiency integrated circuit »).
Energy harvesting is a technology that harvests and converts energies, which occur in everyday life such as human actions, light, heat, vibration of an object and electromagnetic wave and disappear quickly, into usable energies. Among many of the energy harvesting technologies, a triboelectric nanogenerator is a device that obtains static electricity, which can be found when two different materials are in contact and detached.
So far, there have been many studies on triboelectric nanogenerator, however, it has been difficult to commercialize because of its limitations such as small quantity of energy converted from harvested static electricity and that power is only generated when there is friction.
The joint research team fabricated the nano surface structure by using nanoimprinting process to intensify friction under same contact and separate condition. They also used poling process to produce more static electricity under the same given frictional condition due to ease of electron transfer between two objects.
Nanoimprinting process is a method that forms nano surface structures in thermoplastic polymer by stacking nano molds with the polymer films, and then heating under a certain pressure. Poling process is a method that rearranges molecular structures orderly by changing directions of dipoles of the materials in contact and by applying high voltage.
In the meantime, the joint research team successfully invented an integrated circuit that converted temporary and unstable electric energy generated by a triboelectric nanogenerator into reliable power source. They demonstrated that even when 2.5 µW of energy was input, the conversion efficiency recorded over 70%.
It was the first time the team verified that stable power of 1.8V was obtained without external power supply when this newly developed integrated circuit was used. This amount of power was enough to operate sensors of thermo and humidity meters, a calculator and more.
This research was the first demonstration of a triboelectric nanogenerator fabricated by nanoimprinting process using heat and pressure and poling process simultaneously. By using these newly introduced triboelectric nanogenerator and integrated circuit, it is possible to increase the total amount of electric energy produced by obtained static electricity and to convert it into reliable energy. It is expected that this technology can be a reference for future development of a self-powered system which operates sensors without external power source.

This article addresses the high power impulse magnetron sputtering (HIPIMS) deposition of silver (Ag)- nanoparticle films on polyester and draws comparison with films deposited through a direct current pulsed magnetron sputtering (DCMSP) method. Figure 1 shows a diagram of the HIPIMS setup, where Ag and the substrate polyester were used as cathode.