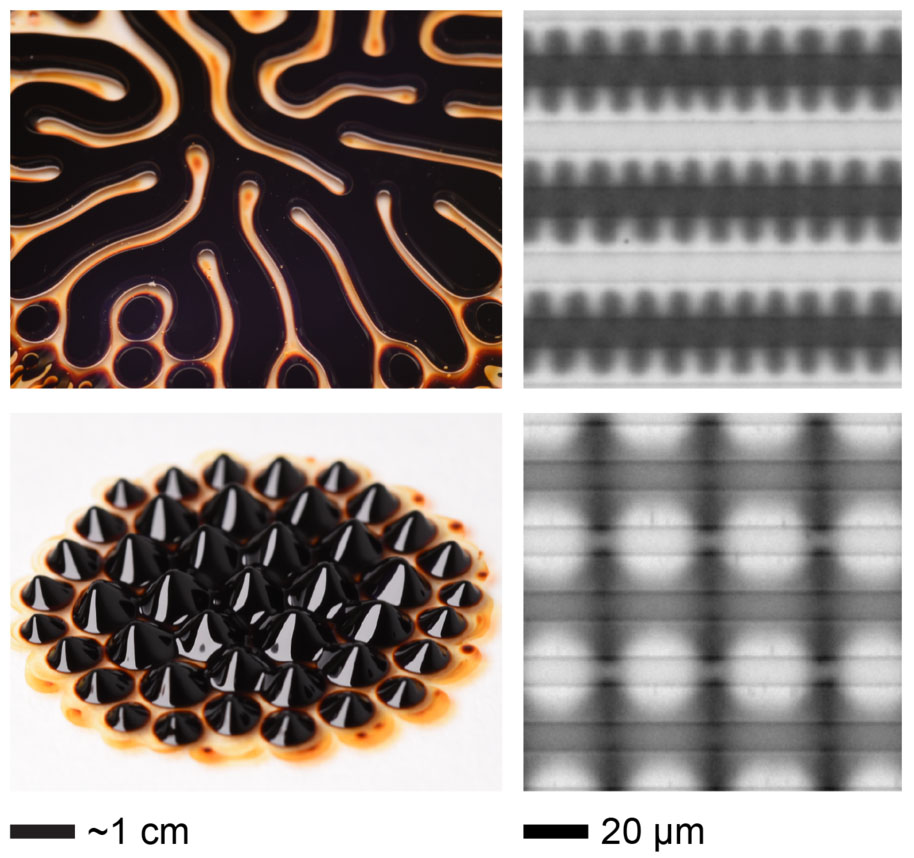 The new system will not only be a valuable tool for studying patterning processes but also has a wide range of potential technological applications.

The mixture consists of an oily liquid carrying nanoparticles of iron oxide, which become magnetized in a magnetic field. Under the right conditions, applying a voltage across this ferrofluid causes the nanoparticles to migrate, forming a concentration gradient in the mixture. For this to work, the ferrofluid has to also include docusate, a waxy chemical that can carry charge through the fluid.

The researchers discovered that the presence of docusate and a voltage across the ferrofluid resulted in a separation of electric charges, with the iron oxide nanoparticles becoming negatively charged. ‘We didn’t expect that at all,’ says Carlo Rigoni, a postdoctoral researcher at Aalto. ‘We still don’t know why it happens. In fact, we don’t even know whether the charges already get split when the docusate is added or if it happens as soon as voltage is turned on.

As a result, applying a magnetic field across the electroferrofluid changes the distribution of the nanoparticles, with the precise pattern depending on the strength and orientation of the magnetic field. In other words, the nanoparticle distribution is unstable, shifting from one state to another, driven by a small change in the external magnetic field. The combination of voltage and docusate transformed the fluid from an equilibrium system into a nonequilibrium system that requires constant energy input to maintain its state – a dissipative system.

These unexpected dynamics make electroferrofluids particularly interesting both scientifically and in terms of potential applications.

‘Ferrofluids have drawn the attention of scientists, engineers and artists since their discovery in 1960s. Now, we have found a truly facile approach to control their magnetic properties on-the-fly just by applying a small voltage to drive the fluid out of thermodynamic equilibrium. This allows a completely new level of control of the fluid properties for technological applications, complexity in the pattern formation, and perhaps even new artistic approaches,’ says Jaakko Timonen, a professor of experimental condensed matter physics at Aalto, who supervised the research.

Rigoni explains that this discovery provides a valuable model system for researchers trying to understand dissipative systems and the pattern formation they underpin, whether in the form of living organisms or complex non-living systems.

‘Most dissipative systems are very complex. For example, it’s very hard to reduce living structures to a set of simple parameters which could explain the emergence of certain structures,’ says Rigoni. The voltage-driven ferrofluid can be used to study the transition into a dissipative system and understand how external influences, such as a magnetic field, interact with the system to generate or modify structures. ‘This could give us hints about how dissipative structures in more complex contexts are created,’ Rigoni says

In addition to its value in fundamental research, the discovery also has potential practical applications. The ability to control the pattern and distribution of nanoparticles is valuable in a range of technologies, such as optical grids and e-ink screens, and the very low power consumption makes this approach especially attractive. ‘This initial research was mainly about the basic science, but we’ve already started work that focuses on applications,’ says Rigoni.