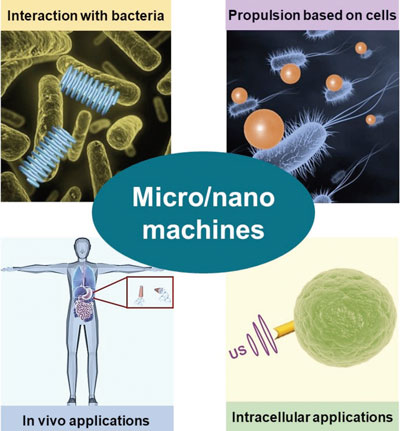 Drawing inspiration from the sophisticated biological machines in nature, researchers have been attempting to bridge our macroscopic world and the microscopic one by building controllable micro- and nanomachines. These synthetic systems are envisioned to move, sense, and implement specific functions like their biological counterparts.

While the micro- and nanomachines that scientists can build today are still primitive to be applied in real life, the long-term value of the study has attracted the attention of the Nobel committee. The Nobel Prize in Chemistry 2016 was awarded jointly to Jean-Pierre Sauvage, Sir J. Fraser Stoddart and Bernard L. Feringa for the design and synthesis of molecular-sized machinery.

As illustrated in the figure below, the first aspect is subdivided into the interaction with bacteria and biohybrid systems harnessing biological cells, while the second aspect discusses the efforts made toward in vivo and intracellular applications of micro/nanomachines.

Researchers have developed various strategies based on micro/nanomachines to detect, isolate, and kill bacteria. The development of innovative solutions to treat bacterial diseases is driven by the urgent demand to change the way we use antibiotics.

Nanomedicine has showcased promising prospect in combating bacterial infections to relieve the antibiotic-resistant strains. Among them are:

Nature provides a myriad of sophisticated biological cells that can display and regulate motion in well-established manners over long ages of evolution. Biohybrid systems integrate these biological cells with synthetic materials, enabling their corporation to make a bigger difference than that by working alone.

Toward realization of the scene in the Hollywood film Fantastic Voyage, extraordinary nanotechnology efforts have been devoted to push micro/nanomachines towards their practical use in in vivo applications. However, this concept poses many challenges to its practical operation.

As a tetherless device, the in vivo navigation of micro/nanomachines requires either self-propulsion using biocompatible fuels or propulsion by other noninvasive energy.

Due to the foreign nature of the synthetic micro/nanomachines, the risk of being destroyed by the immune system and the postprocessing after implementing tasks are crucial problems that cannot be neglected.