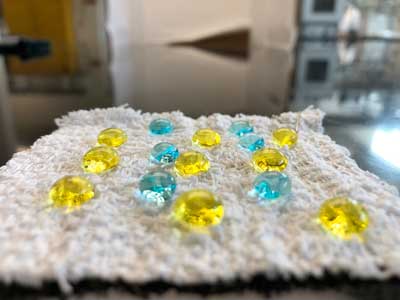 A physics professor from the University of Houston has developed a nanotech coating designed to allow air filters to capture airborne or aerosolized droplets of the virus that causes COVID-19.

The coating works by capturing liquids which encase the virus particles while still allowing air to flow through unimpeded. That allows ventilation systems to remove the virus during normal operation, without retrofitting or limiting the system’s ability to draw fresh air, said Seamus Curran, a physics professor known for his work commercializing nanotechnologies.

The coated filters are currently installed in one public building in New York City, said Nick Benson, director of communications for the Department of Citywide Administrative Services. They have been tested for static pressure suitability and rated positively.

Balancing filtration with air flow is critical to indoor air quality, a key issue as colder weather in some parts of the country pushes more people indoors.

Curran has worked with waterproof coatings, known as hydrophobic coatings, for almost a decade. The filter coating is a new water-based version designed to capture airborne virus particles, trapping them on the filter’s coating without limiting air flow.

He said the treated filters should be used in conjunction with other precautions, including masks and social distancing.

He is commercializing the coating via Curran Biotech, a company he founded to focus on hydrophobic fabric coatings and other products. A second company, Integricote, manufactures coatings for concrete, masonry and wood in a lab at the UH Technology Bridge.

Last spring Curran developed a coating for masks, but as more information emerged about how the virus is spread – traveling through respiratory droplets that can be small enough to drift on air currents – Curran turned his attention to air filters.

Curran said testing at an independent lab, Water Lens, confirmed the treated filter captured the virus while, in comparison, it flowed through untreated filters of the same Minimum Efficiency Reporting Value, or MERV, rating. Water Lens currently is working on viral detection via wastewater.

In fact, Curran said, pollen and other particles that aren’t encapsulated in fluids – in the case of the coronavirus, usually saliva, phlegm and other respiratory fluids – still pass through the filter.

The coating is another example of how nanotechnologies are entering the mainstream. Scott Livingston, CEO of Livingston Securities, which advises investors on nanotechnologies, said he has followed Curran’s work for years.

“Building technologies, including filtration, HVAC systems and indoor air quality, are of paramount importance to reopening America safely,” Livingston said. “The war on COVID is being fought on a number of fronts, and poorly ventilated buildings and transportation systems are of major concern. We support Dr. Curran and look forward to working with Curran Biotech as they scale up this important COVID mitigation solution.”

“Dr. Curran’s nanomaterials breakthrough technology offers a solution to air filtration,” he said. “It is quite an achievement to see a company such as Curran Biotech go from the lab to commercialization.”

Curran is a fellow of the National Academy of Inventors, associate director of the Advanced Manufacturing Institute at UH, and an adjunct professor at the Focus Institute at the Technical University of Dublin. He is a graduate of Trinity College in Dublin, Ireland.