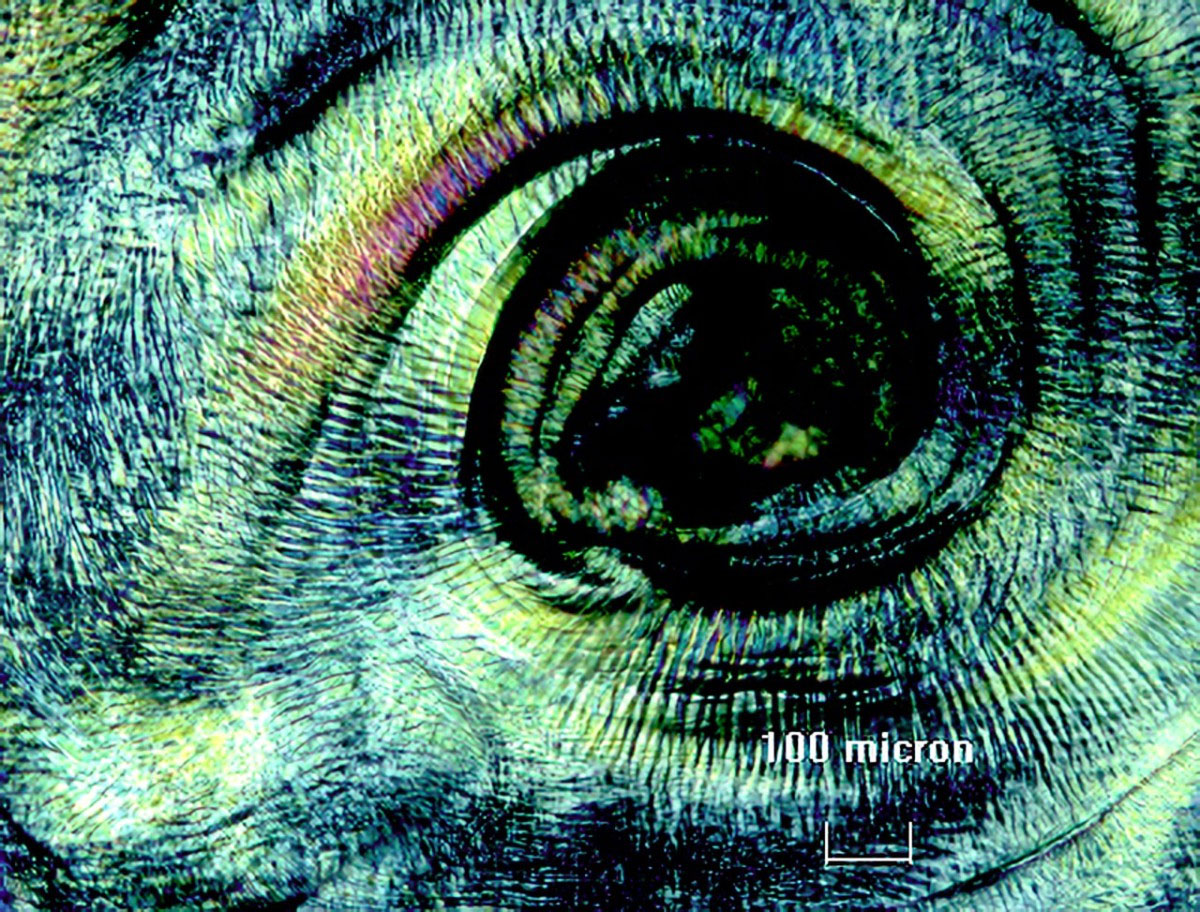 Nature may abhor a vacuum, but it sure loves structure. Complex, self-organized assemblies are found throughout the natural world, from double-helix DNA molecules to the photonic crystals that make butterfly wings so colorful and iridescent.

A Cornell-led project has created synthetic nanoclusters that can mimic this hierarchical self-assembly all the way from the nanometer to the centimeter scale, spanning seven orders of magnitude. The resulting synthetic thin films have the potential to serve as a model system for exploring biomimetic hierarchical systems and future advanced functions.

This image shows synthetic nanoparticles as they self-organize into filaments, then twist into cables, then bundle together into highly ordered bands, ultimately resulting in a thin film that is patterned at centimeter scales.

The group’s paper published in Nature Materials (« Multiscale Hierarchical Structures from a Nanocluster Mesophase »). The lead author is postdoctoral researcher Haixiang Han of the Robinson Group.

Previously, the biggest hurdle for creating this type of synthetic nanomaterial has been the lack of nanoscale building blocks with the necessary versatility to interact across many length scales, enabling them to organize into complex structures, as found in biomolecules.

So a team led by co-senior authors Richard Robinson, associate professor of materials science and engineering in the College of Engineering, and Tobias Hanrath, professor in the Smith School of Chemical and Biomolecular Engineering, turned to cadmium sulfide, a tried-and-true material for nanoparticle research.

Unlike previous efforts to synthesize the compound, the group performed a high-concentration version of synthesis that used very little solvent. The process produced “magic-size clusters” of 57 atoms, about 1.5 nanometers in length. Each of these nanoparticles had a shell of ligands – special binding molecules – that could interact with each other in such a way that they formed filaments several microns long and hundreds of nanometers wide. The filaments were “periodically decorated with these magic-size clusters, like a superhighway of cars, with perfect spacing between them,” according to Robinson.

“If you look down the front of the filament, down the center, it’s radially organized as well as hexagonally structured,” he said. “And because these structured filaments have attractive entanglements, it turns out that when they’re dried under the right conditions, they’ll self-assemble with long-range order.”

Remarkably, by carefully controlling the evaporative geometry, the filaments twisted into larger cables that are hundreds of microns long, and the cables then bundled together and aligned into highly ordered bands, ultimately resulting in a thin film that is patterned at centimeter scales.

“Usually you can’t synthesize something that has hierarchal organization from the nanometer through seven orders of magnitude larger. I think that’s really the special sauce,” Robinson said. “The assemblies mimic a lot of interesting natural products – natural mineralization, natural photonics – things that occur in nature that we haven’t been able to reproduce successfully in the lab.”

The mixture of organic and inorganic interactions gives the magic-size clusters the ability to create films with perfect periodic patterning. The fact that the thin film can show the whole spectrum of a rainbow, which the researchers demonstrated, is proof of its flawless structure.

“It’s likely that people haven’t seen this before because most syntheses have been done at low concentrations, so you have a lot of solvent. They don’t have the same ligand-ligand interactions,” he said. “We changed that. We moved the scale by one click of the decimal place, and we created this solventless synthesis.”

Among the most intriguing aspects of the nanomaterial film is that it displays chiral optical properties – the non-symmetric absorption of polarized light – which are likely manifest at the nanoparticle level, and this characteristic is amplified all the way up to the macroscopic scale. The thin films also share some surprising similarities with liquid crystals.

To better understand the behavior of the self-organization, Robinson and Hanrath consulted a group of collaborators.

Lena Kourkoutis, associate professor in applied and engineering physics, handled the electron microscopy that allowed the team to see where the nanoparticles were located within the filaments. Julia Dshemuchadse, assistant professor in materials science and engineering, theorized the rules that govern the filaments assembly and stability. Researchers from the University of Toronto and the Rochester Institute of Technology estimated the interactions between the electric dipoles that orient the clusters, and developed a theoretical model that showed why the evaporation method caused the nanoclusters to form such a perfectly periodic film, respectively.

The discovery of the remarkable multi-scale structures opens up new avenues to develop technologies that leverage their emerging chiroptical properties.

“The unique light-matter interactions of these chiroptical metamaterials can be used for a range of potential applications, from sensing, catalysis and circular polarized light-detectors to further-out prospects in spintronics, quantum computing and holography,” said Hanrath.

Organic solar cells are made of common organic elements such as carbon, hydrogen, nitrogen, fluorine, oxygen, and sulphur. Their raw materials are cheap, abundant, and can be easily recycled. Although the organic photovoltaic (OPV) elements are lighter, more flexible and cheaper to produce, …