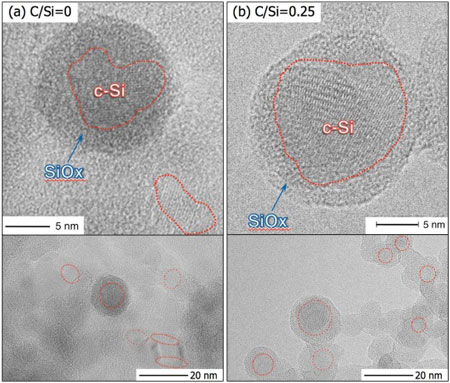 The lithium ion battery market has been growing steadily and has been seeking an approach to increase battery capacity while retaining its capacity for long recharging process.

Structuring materials for electrode at the nanometre-length scale has been known to be an effective way to meet this demand; however, such nanomaterials would essentially need to be produced by high throughput processing in order to transfer these technologies to industry.

This article published in the Science and Technology of Advanced Materials,  reports an approach which potentially has an industrially compatible high throughputs to produce nano-sized composite silicon-based powders as a strong candidate for the negative electrode of the next generation high density lithium ion batteries.

The uniqueness of this processing method is that nanosized SiO composites are produced instantaneously through the evaporation and subsequent co-condensation of the powder feedstock. The approach is called plasma spray physical vapor deposition (PS-PVD). In Fig. 1, raw SiO and PS-PVD SiO composites are shown.

The composites are 20 nm particles, which are composed of a crystalline Si core and SiOx shell. Furthermore, the addition of methane (CH4) promotes the reduction of SiO and results in the decreased SiO-shell thickness as shown in Fig. 2. The core-shell structure is formed in a single-step continuous processing.

As a result, the irreversible capacity was effectively decreased, and half-cell batteries made of PS-PVD powders have exhibited improved initial efficiency and maintenance of capacity as high as 1000 mAhg-1 after 100 cycles at the same time.