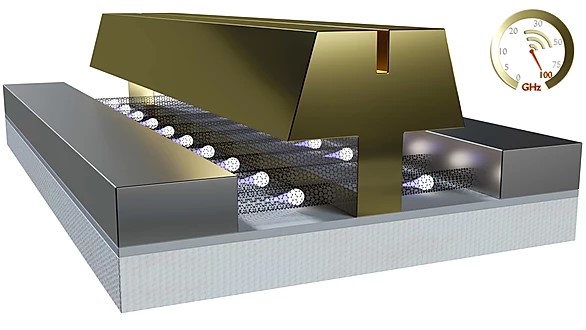 The milestone was reported in the paper, “Wafer-scalable, aligned carbon nanotube transistors operating at frequencies of over 100 GHz,” published this week in the journal, Nature Electronics. A separate commentary in Nature Electronics called the research “a remarkable technology milestone.” The commentary concluded that, “We are now, finally, close to a tipping point in which nanotubes become a serious competitor to silicon in almost all areas of microelectronics.”

For nearly two decades, researchers have theorized that carbon nanotubes would be well suited as a high-frequency transistor technology due to its unique 1-dimensional electron transport characteristics. The engineering challenge has been to assemble the high purity semiconducting nanotubes into densely aligned arrays and create a working device out of the nanomaterial.

Carbonics employs a deposition technology called ZEBRA that enables carbon nanotubes to be densely aligned and deposited onto a variety of chip substrates including silicon, silicon-on-insulator, quartz and flexible materials. This allows the technology to be directly integrated with traditional CMOS digital logic circuits and overcomes the typical problem of heterogeneous integration.

“This milestone shows that carbon nanotubes, long thought to be a promising communications chip technology, can deliver,” said Dr. Joe Qiu, Program Manager at the Army Research Office, who reviewed the research. “The next step is scaling this technology, proving that it can work in high-volume manufacturing. Ultimately, this technology could help the Army meet its needs in communications, radar, electronic warfare and other sensing applications.”

“With this exciting accomplishment, the timing is ripe to leverage our CMOS-compatible technology for the 5G and mmWave defense communication markets. We are now engaged in licensing and technology transfer partnerships with industry participants, while we continue to advance this disruptive RF technology,” said Carbonics’ CEO Kos Galatsis. Carbonics believes that its ZEBRA technology will likely first be adopted in military applications before being used more broadly.

Alloying is a magic trick used to produce new materials by synergistically mixing at least two metallic elements to form a solid solution.