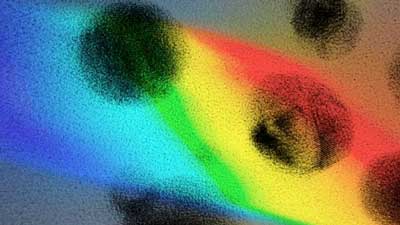 Particle physicists are on the hunt for light. Not just any light, but a characteristic signal produced by the interaction of certain particles — like ghostly neutrinos, which are neutral fundamental particles with very low mass — with a detector that contains an atomic sea of liquefied noble gases.Even if it were brighter, this light signal would be undetectable by our eyes because it falls in the ultraviolet (UV) range of the electromagnetic spectrum. And just as our eyes are not equipped to see UV light, most conventional photodetector systems for particle physics experiments work much better in the visible range than they do in UV.

To make their photosensors more sensitive to UV radiation, Magill and his colleagues at Argonne and the University of Texas at Arlington applied coatings of different nanoparticles to conventional photodetectors. Across a wide range of varying compositions, the results were dramatic. The enhanced photosensors demonstrated significantly greater sensitivity to UV light than the coating-free photodetectors.

There’s nothing like the smell of freshly brewed coffee in the morning. But how does one measure that smell? There’s no energy in a smell to help estimate how potent the coffee might be …