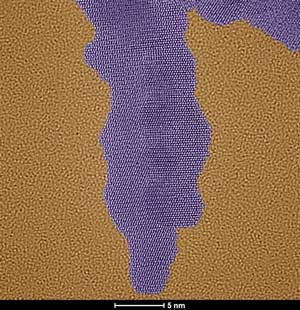 Catalysis is the process of speeding up a chemical reaction; it’s very important for many technologies. Branched nanoparticles are one of the most promising catalysts.
Scientists can control their branch sizes and surfaces to make them more stable and more effective catalysts.
By creating branched nanoparticles from the metal ruthenium, researchers developed a way to increase the speed of catalysis while maintaining the catalyst’s stability (Small, « Formation of Branched Ruthenium Nanoparticles for Improved Electrocatalysis of Oxygen Evolution Reaction »).
Because they have precise control over the nanoparticle’s crystal structure, they can create a reaction that is both highly active and highly stable.
Ruthenium nanoparticles have the potential to be an important catalyst for producing hydrogen fuel. However, most of the time, the ruthenium dissolves in the first few cycles.
This work shows that it is possible for scientists to control the ruthenium’s crystal structure. This could allow them to improve how well ruthenium performs in hydrogen fuel cells. In addition, researchers can apply these principles to a range of different metal nanoparticles. That information will help them create nanocatalysts with high levels of activity and stability.
It is vital to understand how the crystallinity and surface facets of branched nanoparticles affect catalysts’ performance. One context for such performance is splitting water for hydrogen fuel production.
This process involves an anodic reaction (where electrons flow from the fuel cell’s anode) called the oxygen evolution reaction.
Ruthenium nanoparticles are the most active catalyst for this reaction. However, their use is limited because typically the ruthenium will completely dissolve in the first few reaction cycles.
There is some evidence that scientists could reduce the dissolution by using ruthenium metal surfaces with low energy crystal faces. Such nanoparticles are both stable and active, and they are a key target for oxygen evolution reaction catalysts.
This team has made an important advance toward this target by synthesizing and characterizing branched ruthenium nanoparticles with precise control over crystallinity. The team designed the nanoparticles with two critical features: a high surface area, which increases catalytic activity, and low-energy crystal surfaces, which greatly increases catalytic stability.
They found that, by using low ratios of the organic molecules that are used to direct the growth of the nanoparticles, they were able to achieve their goal of long, highly crystalline branches with low energy surfaces. The nanoparticles had much better stability and a five-fold increase in reaction activity compared to polycrystalline ruthenium nanoparticles.
This work highlights the importance of synthetically controlling nanoparticle crystallinity to optimize surface properties for electrocatalysis.
Source: U.S. Department of Energy, Office of Science

Light-emitting diodes (LEDs) are an unsung hero of the lighting industry. They run efficiently, give off little heat and last for a long time …