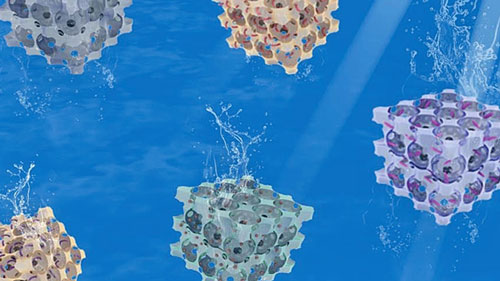 Hydrogels are fascinating natural or synthetic polymer materials that exhibit very versatile chemistries and physical or biological properties. They are 3D networks of either physically or chemically crosslinked polymers that resemble organic tissues and that can hold large amounts of water within their interlocked molecular network.

These soft, translucent materials swell or shrink in response to water absorption or desorption and can hold a large amount of water without losing their structural integrity.

Hydrogels were first proposed for biological use in 1960. In order for a material to be considered a hydrogel, water must constitute at least 10% of its total weight or volume

The ability of hydrogels to absorb water arises from hydrophilic functional groups attached to the polymeric backbone, while their resistance to dissolution arises from cross-links between network chains. Many materials, both naturally occurring and synthetic, fit the definition of hydrogels.

Natural hydrogels include collagen, silk fibroin, hyaluronic acid, chitosan, alginate and hydrogels derived from decellularized tissues. Their unique properties include: biocompatibility, biodegradability, low cytotoxicity, the possibility to tailor the hydrogel into an injectable gel and their similarity to physiological environment.

However, natural hydrogels do have some limitations, for example they do not have strong mechanical properties and are not easily controllable due to their batch-to-batch variation. For these reasons, natural hydrogels are often combined to synthetic ones, creating composite polymers.

Hydrogels have become a highly relevant biochemical scaffold due to their tunable properties, inherent biocompatibility, and similarity with tissue and cell environments. Over the past decade, hydrogels have developed from static materials to “smart” responsive materials adapting to various stimuli, such as pH, temperature, chemical, electrical, or light.

Besides biomedical applications, this makes them useful materials in soft robotics as well as responsive and programmable materials that can be used for catalysts, chemical detectors, and absorbents for carbon capture.

Nanogels are extremely versatile and hydrophilic materials that have a wide range of potential applications within the medical field. Research in this area has found that nanogels are particularly useful as therapeutic drug carriers and can also enhance medical diagnostics when used as carriers for novel imaging probes and contrast agents.