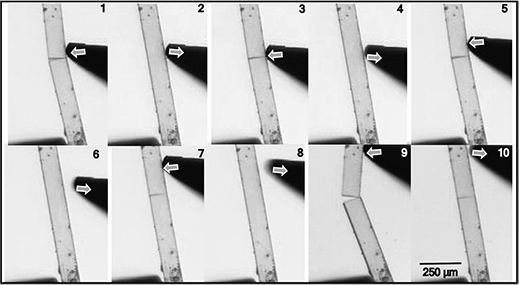 Scientists from the Indian Institute of Science Education and Research (IISER) Kolkata and IIT Kharagpur have discovered a new class of material which, when fractured, can repair themselves within milliseconds. This research has been published in Science.

The highly crystalline materials, when broken into pieces, can self-propel and re-join in the blink of an eye, and repair themselves so precisely that they become indistinguishable from the undisturbed materials. These new materials may find applications in various high-tech applications.

Many materials used in everyday applications often undergo frequent mechanical impacts, which can damage the devices beyond repair. Scientists have been searching for self-repairing materials for prolonging the lifetime of devices without the need for periodic external intervention.

Wound healing in living tissue and bone has inspired many synthetic self-healing polymers, gels and other soft materials. However, replicating such repair in crystalline materials has remained a challenge as they are rigid and prevent diffusion of the material at the damaged part due to dense and regularly arranged molecules in them.

Prof. C Malla Reddy, who in 2015 won the prestigious Swarnajayanti fellowship from the Department of Science and Technology, Government of India, and his team at IISER Kolkata have synthesized a new class of solid materials that – with a head-to-tail (positive end-to-negative end) polar arrangement in the crystalline state – generate opposite electrical potentials at the fracture surfaces when broken. These charges allow an instant recombination and self-repair of the broken crystals without any external intervention. During repair, fractured pieces travel with a honeybee wing-like motion with acceleration comparable to cars (∼ 2.2 m/s2).

« In the past decade, a tremendous amount of research has been done to find self-healing properties in synthetic polymers, gels and composites, which are soft and amorphous in nature, » says Prof. Reddy. « Various strategies have been employed to mimic nature but almost all of them need at least one external stimulus such as heat, light, solvent or a chemical healing agent. And universally all materials fail when the broken parts fall apart. »

Prof. Reddy points out that « another not-yet-accomplished but attractive goal in materials science is to couple the self-healing with crystallinity. Despite the immense potential of highly crystalline materials in numerous high-performance applications related to optical, electrical, energy, biomedical, soft-robotics etc., only a few reports exist on self-healing – with little understanding of the mechanisms. »

Prof. Bhanu Bhusan Khatua from IIT Kharagpur notes that these crystals, which belong to a general class of piezoelectric materials that can generate electricity under mechanical strain, or vice versa, can heal exceptionally well, and retain their crystalline nature, which is important for many applications.

Piezoelectric crystals have a broad range of applications in precision engineering, including transducers, mechanical sensors, energy harvesters, biomedical implants, etc. Piezoelectricity studies conducted by Prof. Bhanu Bhusan Khatua and his student, Dr. Sumanta Karan from IIT Kharagpur, evaluated the potential of these self-healing piezoelectric crystals for electricity generation and durability in devices. Taking cues from nature, they explored the inherent piezoelectricity of crystalline materials for finding a self-healing property.