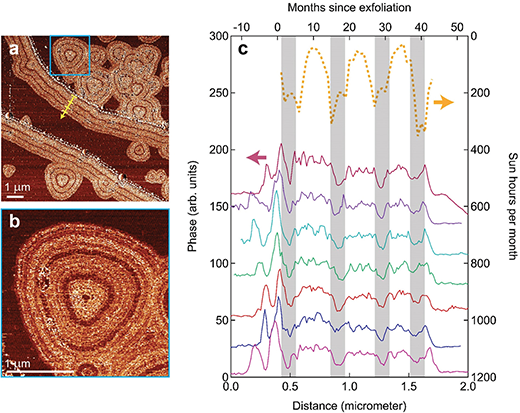 Due to their extraordinary optical and electrical properties, these 2D TMDs have emerged as a promising class of atomically thin semiconductors for a new generation of electronic and optoelectronic devices. For instance, TMDs possess optical properties that could be used to make computers run a million times faster and store information a million times more energy-efficiently.

However, many 2D materials with atomic-scale thicknesses suffer from oxidation and degradation effects under ambient conditions, which is one of the biggest obstacles in their practical applications. Given all the excitement around 2D TMDs, one particular issue that has garnered interest in the TMDs research community is the long-term stability of these materials in different conditions.

They must, for instance, be entirely shielded from light, with even short exposure causing oxidation severe enough to damage electrical contacts and completely destroy optical characteristics.

In particular, the edges of TMD crystal flakes are susceptible to degradation if they are not protected by other layers.

« When assembling van der Waals heterostructures, it is very useful to take the layer order and location of protected and unprotected edges in the TMDs flake into consideration, when for instance placing contacts or planning experiments involving multiple thicknesses, » Peter Bøggild, a professor in the Department of Physics at Technical University of Denmark (DTU), tells Nanowerk.

What is remarkable in this work is the fact that the research team’s investigation covered a period of 75 months – so far the longest degradation study performed on any layered material. This enabled them to collect a unique data set of natural oxidation data in ambient conditions spanning this long time period of more than six years.

« It was a bit of a coincidence that we started studying this flake over so many years, » says Lene Gammelgaard, the paper’s first author. « First, we wanted to verify the correlation between the optical contrast and the thickness of the flake. A staircase-like flake with multiple regions with different number of layers was ideal for this. However, when we observed the quite striking difference in the phase contrast for some of the steps we got excited and decided to look further into it; so we made sure to put the flake into dark storage for further study. »

Scientists make extensive use of X-ray fluorescence to map elements in materials. However, this technique does not have the needed spatial sensitivity unless the probe is finely focused.

Two-dimensional (2D) materials could offer new building blocks for future technologies — but only if scientists can control growth and properties. Strain, caused by “stretching” or “bunching” the atomic structure as a crystal grows, is one way to control these properties.