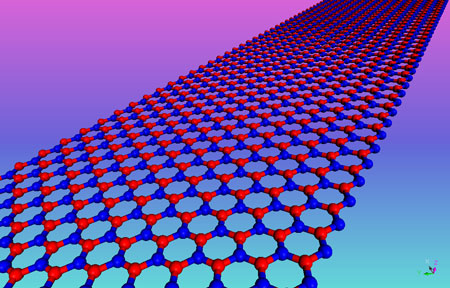 Graphene nanoribbons – atomically-thin strips of graphene that are just a few nanometers wide – are considered to be excellent candidates for future electronics applications as their properties can be adjusted through width and edge shape.

Along with graphene, boron nitride nanoribbons have attracted more and more fundamental research interest. For instance, researchers have found that magnetism could be induced in such ribbons by the replacement of B or N with Be, B, C, N, O, Al, and Si, or with vacancy defects (see: « Magnetism of C Adatoms on BN Nanostructures: Implications for Functional Nanodevices »). They also found that the ribbons could have a narrowed band gap and improved electrical conductivity tuned by a transverse electric field or special edge structure (see for instance: « Energy Gaps and Stark Effect in Boron Nitride Nanoribbons »). These findings promise a bright future in in optoelectronics and spintronics for atomically thin boron nitride nanoribbons.

However, a major challenge in providing experimental evidence is that the preparation of atomically thin boron nitride nanoribbons is very difficult.

« Previous experiments and design theories suggest that the intercalation of molecules into a boron nitride interlayer space is much more difficult compared to graphite » Haibo Zeng, a research scientist at the International Center for Materials Nanoarchitectonics (MANA) in Japan, explains to Nanowerk. « Furthermore, the interlayer interactions of boron nitride layers are stronger than those in graphite. This creates significant difficulties in standard chemical exfoliation and mechanical cleaving of boron nitride crystals into nanoribbons. »

In new work that represents an important step in bridging theoretical predictions and experimental realization of atomically thin boron nitride nanoribbons, Zeng and coworkers (from National Institute for Materials Science (NIMS) in Japan and Nanjing University of Aeronautics and Astronautics (NUAA) in China) demonstrate the successful fabrication of ‘white graphene’ nanoribbons – made of thermally and chemically stable atomic layers of hexagonal boron nitride (h-BN) – by unwrapping multiwalled boron nitride nanotubes under delicate argon plasma etching. They show that the insulator-semiconductor electrical transition takes place during this processing and that this typically electrically insulating compound becomes a semiconductor when it is in ribbon morphology.

h-BN is a layered material analogous to graphite – the hexagonal honeycomb-like layers made of alternating B and N atoms are stacked so that each B3N3 hexagons is placed above and below N3B3 hexagons. Similarly to carbon nanotubes, there exist boron nitride nanotubes, however, compared with hardly predictable electrical performance of carbon nanotubes that strongly depends on the graphene sheet wrapping angle and other structural parameters, boron nitride nanotubes are insulating with a bandgap of ∼5.5 eV that is nearly independent of tube diameter, chirality, and number of tube walls.

Zeng explains that, in their fabrication process, they first embedded the initial boron nitride multiwalled nanotubes in a polymer film with one tube wall side exposed, and then the plasma etching was implemented to consecutively unzip, unwrap and exfoliate the tube walls.

« With regard to 2-dimensional (2D) crystals, the nanoribbons are quite different from the larger sheets with several hundred nanometers dimensions » says Zeng. « The key point is that the electronic and spin states of the 2D crystal edges are completely different from the other parts. While this has been well demonstrated in graphene nanoribbons, the lack of practical fabrication techniques for boron nitride nanoribbons has posed a persistent challenge in advancing to a practical device level and deeper understanding on the rich physics involved. »

In 1900, German physician Paul Ehrlich came up with the notion of a “magic bullet.” The basic idea is to inject a patient with smart particles capable of finding, recognizing, and treating a disease. Medicine has pursued the magic bullet ever since.

A new bendable supercapacitor made from graphene, which charges quickly and safely stores a record-high level of energy for use over a long period, has been developed and demonstrated by UCL and Chinese Academy of Sciences researchers.