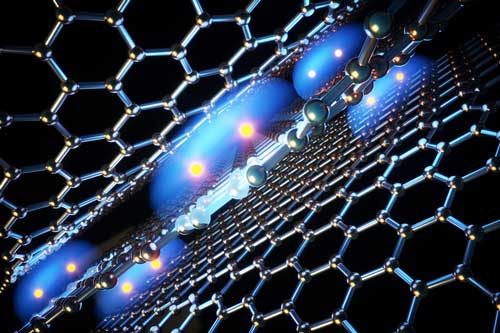 n a paper appearing in Nature (« Tunable strongly coupled superconductivity in magic-angle twisted trilayer graphene »), Jarillo-Herrero and his group report observing superconductivity in a sandwich of three graphene sheets, the middle layer of which is twisted at a new angle with respect to the outer layers. This new trilayer configuration exhibits superconductivity that is more robust than its bilayer counterpart.

The researchers can also tune the structure’s superconductivity by applying and varying the strength of an external electric field. By tuning the trilayer structure, the researchers were able to produce ultra-strongly coupled superconductivity, an exotic type of electrical behavior that has rarely been seen in any other material.

“It wasn’t clear if magic-angle bilayer graphene was an exceptional thing, but now we know it’s not alone; it has a cousin in the trilayer case,” Jarillo-Herrero says. “The discovery of this hypertunable superconductor extends the twistronics field into entirely new directions, with potential applications in quantum information and sensing technologies.”

His co-authors are lead author Jeong Min Park and Yuan Cao at MIT, and Kenji Watanabe and Takashi Taniguchi of the National Institute of Materials Science in Japan.

Shortly after Jarillo-Herrero and his colleagues discovered that superconductivity could be generated in twisted bilayer graphene (Nature, « Unconventional superconductivity in magic-angle graphene superlattices »), theorists proposed that the same phenomenon might be seen in three or more layers of graphene (Physical Review B, « Magic angle hierarchy in twisted graphene multilayers »).

A sheet of graphene is an atom-thin layer of graphite, made entirely of carbon atoms arranged in a honeycomb lattice, like the thinnest, sturdiest chicken wire. The theorists proposed that if three sheets of graphene were stacked like a sandwich, with the middle layer rotated by 1.56 degrees with respect to the outer layers, the twisted configuration would create a kind of symmetry that would encourage electrons in the material to pair up and flow without resistance — the hallmark of superconductivity.

“We thought, why not, let’s give it a try and test this idea,” Jarillo-Herrero says.

Park and Cao engineered trilayer graphene structures by carefully slicing a single gossamer sheet of graphene into three sections and stacking each section on top of each other at the precise angles predicted by the theorists.

They made several trilayer structures, each measuring a few micrometers across (about 1/100 the diameter of a human hair), and three atoms tall.

The team then attached electrodes to either end of the structures, and ran an electric current through while measuring the amount of energy lost or dissipated in the material.

Transition metal dichalcogenides (TMDs) represent a large family of layered semiconductor materials of the type MX2, with M a transition metal atom (Mo, W, etc.) and X a chalcogen atom (S, Se, or Te). One layer of M atoms is sandwiched between two layers of X atoms. Many TMDs exhibit tunable band gaps that can undergo a transition from …