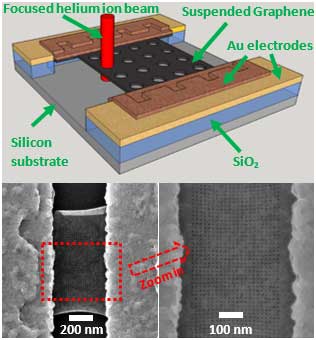 This provides a practical way to investigate the intrinsic properties of graphene nanomesh towards the application for gas sensing, phonon engineering, and quantum technology.

Graphene, with its excellent electrical, thermal and optical properties, is promising for many applications in the next decade. It is also a potential candidate instead of silicon to build the next generation of electrical circuits. However, without a bandgap, it is not straightforward to use graphene as field-effect transistors (FETs)

Compared to slow speed TEM patterning, the helium ion beam milling technique overcomes the speed limitation while providing high imaging resolution. With the initial electrical measurements, the researchers found that the thermal activation energy of the graphene nanomesh increased exponentially with increasing porosity of the graphene nanomesh. This immediately provides a new method for bandgap engineering beyond the conventional nanoribbon method. The team plans to continue exploring graphene nanomesh towards the application of phonon engineering.

“Graphene nanomesh is a kind of new ‘brick’ for modern micromachine systems. Theoretically, we can generate many kinds of periodical patterns on the original suspended graphene, which tunes the property of the device to the direction for a special application, in particular nanoscale thermal management” says Prof. Hiroshi Mizuta, the Head of Mizuta Lab.

The Mizuta lab is currently developing the electrical and thermal properties of graphene-based devices for fundamental physics and potential applications such as gas sensors and thermal rectifiers.

To reach the target of carbon neutrality, a transition from fossil energy to renewable energy generation is indispensable. Photovoltaic technology is considered as one of the most prominent sources of renewable energy.