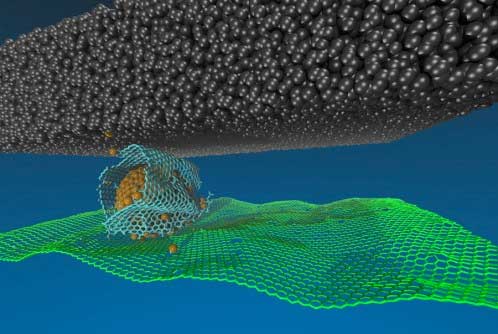 Anyone who has ever taken their car in for an oil change recognizes the importance of reducing the friction that arises when steel touches steel.

Researchers at the U.S. Department of Energy’s (DOE) Argonne National Laboratory have been working for years to replace oil with solid lubricants such as graphene, which is a cheaper and more efficient substitute, one that lasts significantly longer.

Argonne’s Laboratory Directed Research and Development (LDRD) Program, which gave them the seed money they needed to begin their experimentation, initially funded the work of Argonne researchers Anirudha Sumant and Ali Erdemir.

Graphene can also be used to better protect ball bearings, which can corrode over time when exposed to water, the process commonly referred to as tribo-corrosion. The Argonne-developed process based on graphene has shown that a few layers of graphene not only reduces friction in steel rubbing against steel by seven times and the wear by 10,000 times but also significantly reduces the tribo-corrosion problem.

“That’s a significant improvement over any other existing solid lubricants coating available today,” Sumant said. “Also, the amount of graphene needed is very small and therefore cost is much lower and eliminating oil waste would be more environmental friendly, which is a great side benefit.”

Sumant and his colleagues’ work has far reaching implications both inside and outside the automobile industry. It could help wind turbines move with greater ease, allowing them to produce more energy. It also can better seal off machinery as it pumps oil or gas from the ground or out at sea.

The Argonne team, led by Sumant, who is a researcher at the Center for Nanoscale Materials, went on to win two additional grants totaling $1.4 million from the U.S. Department of Energy.

It was through the initial LDRD funding that they recognized graphene as an emerging solid lubricant, one that works differently than existing oil-based and other solid lubricants, including graphite lube and even diamond-like carbon.

Not only does graphene perform better, it’s more affordable. Even moderate quality graphene works great for tribological applications, which is not the case for various electronics and sensor applications.

Most of the cost in conventional solid lubricant coatings relates to the infrastructure needed to apply it, including the electricity to run the related machinery and the machines’ maintenance. Not so with graphene, which can be applied by spraying a solution in the air and can coat any complicated shape or size — and over a large surface area.

The ability to record and map the full range of brain signals using electrophysiological probes will greatly advance our understanding of brain diseases and aid the clinical management of patients with diverse neurological disorders. However, current technologies are limited in their ability to accurately obtain with high spatial fidelity ultraslow brain signals.