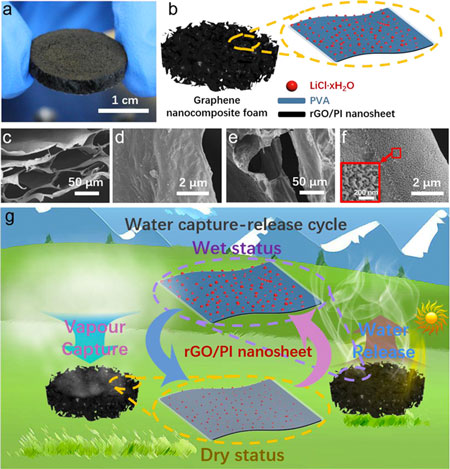 Only 30% of all freshwater on the planet is not locked up in ice caps or glaciers (not for much longer, though). Of that, some 20% is in areas too remote for humans to access and of the remaining 80% about three-quarters comes at the wrong time and place – in monsoons and floods – and is not always captured for use by people. The remainder is less than 0.08 of 1% of the total water on the planet.

An abundant of water equivalent to about 10% of the total freshwater in lakes exists in the earth atmosphere, which can be a non-negligible freshwater resource to fight against the water shortage.

That’s where the graphene nanocomposite foam comes in: The foam realizes water harvesting through a capture-release cycle:

2) the release relies on the solar-to-thermal transformer, reduced graphene oxide (rGO), to facilitate evaporation. In addition, polyimide is employed as a substrate material for the purpose of 3D porous structure formation and mechanical property enhancement.

The as-fabricated foam can adsorb water up to 2.87 g per gram in 24 hours at a relative humidity of 90% and a temperature of 30°C, and release almost all the uptake water when it is exposed under a flux of 1 sun (1000 W per square meter, equal to the light intensity of natural sunlight) for 3 hours.

At the same time, the functional foam shows superelasticity, lightweight, and remarkable reusability, thus revealing its possibility to practical use.

The researchers write that, even though the rGO/PI nanocomposite foam can harvest freshwater from air, it is essential to enhance water harvesting efficiency.

« Another big challenge impedes the water harvesting system utilization to explore a more cost-effective way to prepare the products, » they conclude. « Though the three-step synthesis method and the composition of the foam have been optimized, it is still necessary to reduce the cost and increase the fabrication efficiency. Meanwhile, environmentally friendly materials are recommended, which would take the water harvesting system one step further to commercial application and large-scale production. »

Silicon is the basic material that is used in our smart phones, in optical sensors, or in solar cells on our roofs. It is a major outstanding challenge that silicon absorbs incident light only weakly, especially in the red part of the visible spectrum.