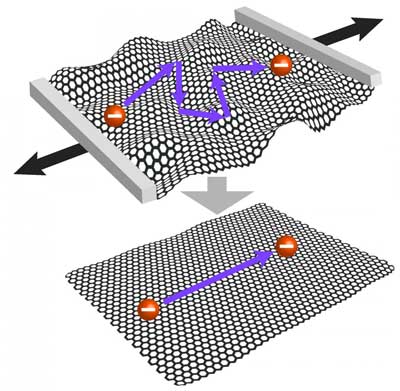 Bumps on a road slow down our pace, so do corrugations in graphene to travelling electrons. By flattening the corrugations out, we help electrons move effectively faster through a graphene sheet.

Limits because of microscopic distortions

The sample quality of graphene has been improved significantly since its discovery. One factor that limited further improvements has not been investigated directly so far, namely corrugations in the graphene sheet, i.e. microscopic distortions that form even when placed on atomically flat surfaces. Such corrugations can scatter the electrons when moving through an electronic device.

The team of professor Christian Schönenberger of the Swiss Nanoscience Institute and Department of Physics at the University of Basel has developed a technique to pull the graphene sheet on two opposite sides and thereby flattening and smoothing it.

« It is similar to pulling on a piece of crumpled paper which irons out wrinkles and folds», says Dr. Lujun Wang, first author of the study.

« After this process, the electrons travel effectively faster through the graphene sheet, their « mobility » increases, demonstrating an improved sample quality », his supervisor Dr. Andreas Baumgartner adds.

These findings not only help us to further understand the electron transport in graphene but also provide instructions for studying other two-dimensional materials.

In the background material to his Nobel Prize talk in 2010, Prof. Geim illustrated the strength of graphene with his now famous cat hammock example : The unit hexagonal cell of graphene contains two carbon atoms and has an area of 0.052 nm2. That translates into a density of 0.77 mg/m2. A hypothetical hammock measuring one square meter made from graphene would thus weigh 0.77 mg.