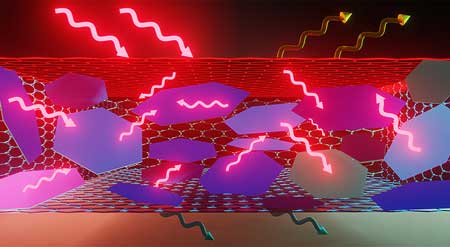 Device miniaturization and a consequent increase in the heat and electromagnetic (EM) wave emission in the electronic systems make the simultaneous heat management and electromagnetic interference (EMI) shielding crucially important.
Any working electronic device is the source of EM radiation. For this reason, the electronic components must be protected from EM radiations to avoid degradation and failure.
A fast increase in wireless communications, portable devices, and high-power transmission lines has made the environmental EM pollution a major concern for human health. The dense packing of the electronic components in the state-of-the-art 2D, 2.5D and 3D integrated systems and generation of high heat fluxes create an environment with elevated temperatures, which adversely affect the efficiency and stability of the EMI shielding.
The conventional materials for EMI shielding are metals or composites with metal fillers, which are utilized as coatings and enclosures. Metals possess a high density of mobile charge carriers, which blocks the EM waves mostly by the reflection mechanism.
However, metallic shields are heavy and prone to oxidation, resulting in corrosion. Increase in temperature also leads to degradation of EMI shielding by metals or composites with the metal fillers.
In the recent work, a research team led by a distinguished professor Alexander A. Balandin and research professor Fariborz Kargar, Department of Electrical and Computer Engineering, University of California – Riverside (UCR), reported on the scalable synthesis of composites with graphene fillers, and testing their EMI shielding efficiency in the X-band (frequency range of 8.2 GHz – 12.4 GHz) and the extremely high frequency (EHF) band (frequency range of 220 GHz – 325 GHz).
The examined frequency bands are pertinent to state-of-the-art and future communication systems. It was found that the composites of 1 mm thickness with graphene loading of only 8 wt% provide excellent electromagnetic shielding of 70 dB in the sub-terahertz EHF frequency with negligible energy reflection to the environment (Figure 1 and 2). The 70-dB shielding corresponds to blocking 99.99999% of EM energy.
In the X-band frequency band, graphene composites have also been tested for performance at elevated temperatures, demonstrating properties superior to other composites with conductive metal fillers.
The results of the testing of graphene EMI shilling materials in the sub-THz and GHz ranges have been reported in two recent publications: « Multifunctional graphene composites for electromagnetic shielding and thermal management at elevated temperatures » in Advanced Electronic Materials and « Graphene epoxy-based composites as efficient electromagnetic absorbers in the extremely high-frequency band » in ACS Applied Materials Interfaces. The first author of the journal papers – Zahra Barani – is a Ph.D. student and researcher in the Phonon Optimized Engineered Materials (POEM) Center, directed by Balandin.“The developed lightweight adhesive composites with graphene fillers can be used as electromagnetic absorbers in the high-frequency microwave radio relays, microwave remote sensors, millimeter wave scanners, and wireless local area networks,” explains Balandin. “The excellent electromagnetic shielding and heat conduction characteristics of such graphene composites at elevated temperatures are promising for packaging applications of microwave components where electromagnetic shielding and thermal management are important design considerations.”University of California, Riverside) (click on image to enlarge)
The method of scalable synthesis of such graphene composites is based on the original technology developed in the POEM Center at UCR. In addition to excellent EMI shielding, the composites revealed the room-temperature cross-plane thermal conductivity of ∼11.2 W/mK at the ∼19.5 vol.% of graphene fillers, which is a factor of ×41 larger than that of the pristine epoxy.
Interestingly, the EMI shielding efficiency improves further as the temperature increases to while the thermal conductivity remains approximately constant (Figure 3).
“The reason for the excellent thermal properties of such composites is in exceptionally high thermal conductivity of graphene and few-layer graphene,” said Balandin.
The extremely high intrinsic thermal conductivity of graphene has been discovered in his laboratory at UCR in 2008.Recent technological developments have demonstrated that the liquid phase exfoliated graphene and few-layer graphene can be produced inexpensively and in large quantities. Various methods of reduction of graphene oxide have also been reported. The progress in graphene synthesis make graphene and few-layer graphene fillers practical even for the composites with the high loading.
“The extremely high thermal conductivity of graphene and good electrical conductivity, even without the energy band-gap, make graphene promising for EMI shielding and thermal management applications,” concludes Balandin.

Materials for aerospace applications face many challenges. The structure of an aircraft must be light yet strong. Structural components such as the wings or fuselage must resist damage while …