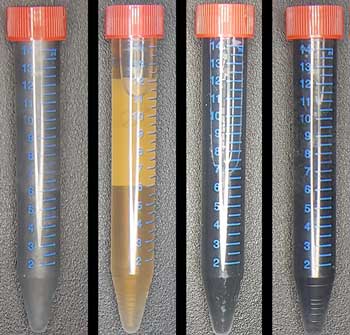 In order to create new and more efficient computers, medical devices, and other advanced technologies, researchers are turning to nanomaterials: materials manipulated on the scale of atoms or molecules that exhibit unique properties.

Graphene is a revolutionary nanomaterial due to its ability to easily conduct electricity, as well as its extraordinary mechanical strength and flexibility. However, a major hurdle in adopting it for everyday applications is producing graphene at a large scale, while still retaining its amazing properties.

In a paper published in the journal ChemOpen (« Creation of Conductive Graphene Materials by Bacterial Reduction Using Shewanella Oneidensis« ), Anne S. Meyer, an associate professor of biology at the University of Rochester, and her colleagues at Delft University of Technology in the Netherlands, describe a way to overcome this barrier.

The researchers outline their method to produce graphene materials using a novel technique: mixing oxidized graphite with bacteria. Their method is a more cost-efficient, time-saving, and environmentally friendly way of producing graphene materials versus those produced chemically, and could lead to the creation of innovative computer technologies and medical equipment.

Graphene is extracted from graphite, the material found in an ordinary pencil. At exactly one atom thick, graphene is the thinnest—yet strongest—two-dimensional material known to researchers (check out this graphene infographic). Scientists from the University of Manchester in the United Kingdom were awarded the 2010 Nobel Prize in Physics for their discovery of graphene; however, their method of using sticky tape to make graphene yielded only small amounts of the material.

“For real applications you need large amounts,” Meyer says. “Producing these bulk amounts is challenging and typically results in graphene that is thicker and less pure. This is where our work came in.”

In order to produce larger quantities of graphene materials, Meyer and her colleagues started with a vial of graphite. They exfoliated the graphite—shedding the layers of material—to produce graphene oxide (GO), which they then mixed with the bacteria Shewanella. They let the beaker of bacteria and precursor materials sit overnight, during which time the bacteria reduced the GO to a graphene material.

While the bacterially-produced graphene material created in Meyer’s lab is conductive, it is also thinner and more stable than graphene produced chemically. It can additionally be stored for longer periods of time, making it well suited for a variety of applications, including field-effect transistor (FET) biosensors and conducting ink. FET biosensors are devices that detect biological molecules and could be used to perform, for example, real-time glucose monitoring for diabetics.

“When biological molecules bind to the device, they change the conductance of the surface, sending a signal that the molecule is present,” Meyer says. “To make a good FET biosensor you want a material that is highly conductive but can also be modified to bind to specific molecules.” Graphene oxide that has been reduced is an ideal material because it is lightweight and very conductive, but it typically retains a small number of oxygen groups that can be used to bind to the molecules of interest.

The bacterially produced graphene material could also be the basis for conductive inks, which could, in turn, be used to make faster and more efficient computer keyboards, circuit boards, or small wires such as those used to defrost car windshields. Using conductive inks is an “easier, more economical way to produce electrical circuits, compared to traditional techniques,” Meyer says. Conductive inks could also be used to produce electrical circuits on top of nontraditional materials like fabric or paper.

“Our bacterially produced graphene material will lead to far better suitability for product development,” Meyer says. “We were even able to develop a technique of ‘bacterial lithography’ to create graphene materials that were only conductive on one side, which can lead to the development of new, advanced nanocomposite materials.”

The concepts of metamaterials and metasurfaces have spawned massive novel applications in free-space optics. However, recent research also indicates that they possess prominent potential for tailoring the electromagnetic modes in optical waveguides.

Herpes simplex is a viral infection caused by the herpes simplex virus (HSV). Worldwide rates of either HSV-1