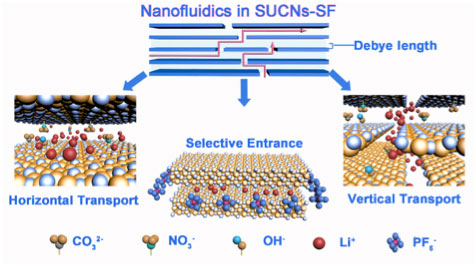 Motived by the large number of non-layered materials, e.g. transition metal oxides, which hold great promise in battery applications, scientists aim to extend the concept of nanofluidic channels into these materials and improve their electrochemical properties.

Nanofluidic channels feature a unique unipolar ionic transport when properly designed and constructed. By controlling surface charge and channel spacing, enhanced and selective ion transport can be achieved in these channels by constructing them with dimensions comparable to the double Debye length and opposite surface charge with respect to the transporting ion.

« Such constructed 2D nanofluidic channels in non-layered materials manifest a general structural engineering strategy for improving electrochemical properties in a vast number of different electrode materials, » Guihua Yu, a professor in Materials Science and Engineering, Mechanical Engineering, at the Texas Materials Institute, University of Texas at Austin. « The enhanced and selective ion transport demonstrated in our study is of broad interest to many applications where fast kinetics of ion transport is essential. »

The electronic behavior of thin films is heavily influenced by the contact with their surroundings, as exemplified by the recent discovery of 2D superconductivity at a thin film interface. However, information about how such entwined states come into existence is limited by the lack of tools capable of visualizing such buried interfaces.