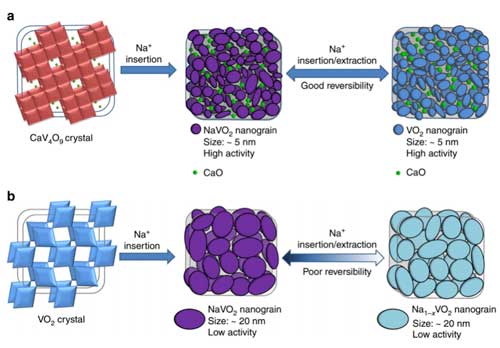 Finding suitable electrode materials, especially anode materials, is a very important task for the development of sodium-ion batteries. « The larger ionic size of Na+ than Li+results in a significantly different insertion reaction process. Hence the commercialized graphite anode for Li-ion battery cannot be used in Na-ion battery. » says Liqiang Mai, a professor at the State Key Laboratory of Advanced Technology for Materials Synthesis and Processing, Wuhan University of Technology (WUT).

In the past five years, large numbers of research works about Na-ion battery anodes have been reported. The previously reported anodes mainly include the following categories: hard carbon, Ti-based anodes, conversion reaction based anodes and alloying reaction based anodes. However, these anodes still face some challenges for commercialization.

For example, hard carbon is limited by a poor rate capability and safety issues; Ti-based anodes generally display low capacity due to limited intercalation sites; other anode materials based on conversion or alloying reactions can deliver high initial capacity, but the inevitable large volume change during the discharge/charge process is a serious issue.

In this case, finding new anode materials with intrinsically good electrochemical properties are still very important for the development of SIBs.