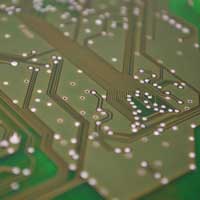 Although nanowires are answering the demands of the market for innovative, smaller, flexible electronic devices by enabling electronic circuits on the molecular scale, assembly of nanowires into functional materials remains a problem.
A group of researchers from Kaunas University of Technology (KTU), Lithuania are offering a novel solution for high-yield nanowire production from zinc oxide – a cheaper and environmentally friendlier material, compared to the rare earth elements such as indium, arsenic or gallium often used in electronics production.
According to scientists, nanowire synthesis is mostly limited by the surface of growth, hindering their wide application. Also, many applications require properties, which are contradictive and therefore cannot be effectively realised in a single material.
The new method for zinc oxide nanowires production, created by the group of scientists from KTU Institute of Materials Science, tackles these problems (“ARTIKEL”). Thus the wider application of nanowires in innovative electronic devices, which are increasingly smaller, flexible and involving different surface materials is becoming possible.
“The new method was created while I was researching simple ways to grow metal oxide nanostructures. The method, which we now call combustion synthesis, allows producing high levels of a controlled nanostructure. Nanowires are being grown in the gas phase, the final product collected as powder and then dispersed in various solutions. Simple coating methods such as spraying allow placing zinc oxide nanowires on various surfaces”, says Dr Simas Rackauskas, a researcher at the KTU Institute of Materials Science.
Due to their semiconductor properties, zinc oxide nanowires have great potential of application in electronics or optics. Also, the properties of zinc oxide coated surfaces allow their usage in medicine. At the moment, researchers are investigating two potential applications of the zinc oxide nanowires: a multifunctional anti-reflecting solar cell coating and multifunctional gas sensor array, sensitive and selective to gases, activated by light.
“Solar elements currently used in the market are reflecting light, thus the light, which could be turned into energy, is partly lost. Nanowire solar cell coatings improve the performance of solar cells by reducing their reflective qualities, by transforming UV rays into light and by rendering the solar elements self-cleaning properties”, explains Dr Rackauskas.
Initial research reveals that by using zinc oxide nanowire coating the efficiency of solar elements is improved by 6 per cent. The coating is water-repelling, and it degrades the organic pollutants; thus the self-cleaning effect of a solar cell is achieved.
At the moment, in the laboratory conditions, the KTU research team can produce around 100 g of zinc oxide nanoparticles per hour, costing around EUR 8. The amount would be enough to cover the 2.5 m2 of solar elements.
KTU researchers are also investigating the properties of a unique UV sensor, which can be sprayed on any surface. In the development of the sensor two materials are used: zinc oxide nanoparticles and a conductor (wire), such as graphite or metal paint. One can draw a full electronic scheme including wire and sensor on any surface, say textile, paper or plastic. According to Dr Rackauskas, a light sensor can be used like any other switch, just it is activated by light, such as a simple laser pointer beam.
“The application possibilities of such a UV sensor are virtually inexhaustible, however, we need to wait for the market demand and the further development of flexible electronics. Our product might be interesting for functional design as it allows integrating electronics into clothing items, walls, interior design objects. Also, our UV switch can be placed in hard-to-access locations”, explains Dr Rackauskas.
He is emphasising the low cost and eco-friendliness of zinc in electronics production: “Most electronic production uses rare earth elements, such as indium, arsenic and gallium, which are hard to extract, the process is expensive and harmful to the environment. On the other hand, Zinc is very popular, cheap and even beneficial for the human organism”.
According to the KTU researcher, if the rare earth elements in electronics would be replaced by zinc oxide, this would result in less expensive and environmentally friendly solutions.

Nanogels have emerged over the last few years as an effective vessel for carrying and releasing drugs to patients and have since become one of the many parts of nanomedicine—the interface where nanotechnology, medicine and pharmaceuticals have merged together to create their own defined field.