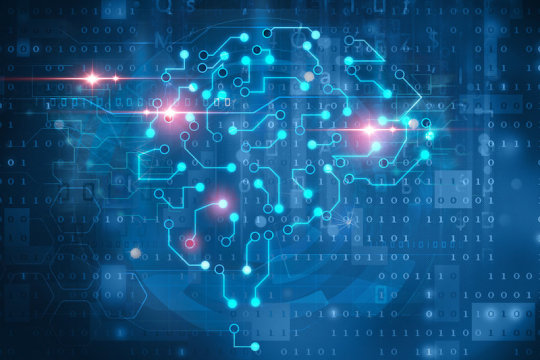 Researchers have conquered the monumental task of manufacturing scalable nanoprobe arrays small enough to record the inner workings of human cardiac cells and primary neurons.
The ability to read electrical activities from cells is the foundation of many biomedical procedures, such as brain activity mapping and neural prosthetics. Developing new tools for intracellular electrophysiology (the electric current running within cells) that push the limits of what is physically possible (spatiotemporal resolution) while reducing invasiveness could provide a deeper understanding of electrogenic cells and their networks in tissues, as well as new directions for human-machine interfaces.
In a paper published by Nature Nanotechnology, scientists from Surrey’s Advanced Technology Institute (ATI) and Harvard University detail how they produced an array of the ultra-small U-shaped nanowire field-effect transistor probes for intracellular recording. This incredibly small structure was used to record, with great clarity, the inner activity of primary neurons and other electrogenic cells, and the device has the capacity for multi-channel recordings.
Dr Yunlong Zhao from the ATI at the University of Surrey said: “If our medical professionals are to continue to understand our physical condition better and help us live longer, it is important that we continue to push the boundaries of modern science in order to give them the best possible tools to do their jobs. For this to be possible, an intersection between humans and machines is inevitable.
“Our ultra-small, flexible, nanowire probes could be a very powerful tool as they can measure intracellular signals with amplitudes comparable with those measured with patch clamp techniques; with the advantage of the device being scalable, it causes less discomfort and no fatal damage to the cell (cytosol dilation). Through this work, we found clear evidence for how both size and curvature affect device internalisation and intracellular recording signal.”
Professor Charles Lieber from the Department of Chemistry and Chemical Biology at Harvard University said: “This work represents a major step towards tackling the general problem of integrating ‘synthesised’ nanoscale building blocks into chip and wafer scale arrays, and thereby allowing us to address the long-standing challenge of scalable intracellular recording.
“The beauty of science to many, ourselves included, is having such challenges to drive hypotheses and future work. In the longer term, we see these probe developments adding to our capabilities that ultimately drive advanced high-resolution brain-machine interfaces and perhaps eventually bringing cyborgs to reality.”
Professor Ravi Silva, Director of the ATI at the University of Surrey, said: “This incredibly exciting and ambitious piece of work illustrates the value of academic collaboration. Along with the possibility of upgrading the tools we use to monitor cells, this work has laid the foundations for machine and human interfaces that could improve lives across the world.”
Dr Yunlong Zhao and his team are currently working on novel energy storage devices, electrochemical probing, bioelectronic devices, sensors and 3D soft electronic systems. Undergraduate, graduate and postdoc students with backgrounds in energy storage, electrochemistry, nanofabrication, bioelectronics, tissue engineering are very welcome to contact Dr Zhao to explore the opportunities further.

Biosensors integrated into smartphones, smart watches, and other gadgets are about to become a reality. In a paper featured on the cover of the January issue of Sensors (“Vertically Coupled Plasmonic Racetrack Ring Resonator for Biosensor Applications”), researchers from the Moscow Institute of Physics and Technology describe a way to increase the sensitivity of biological detectors to the point where they can be used in mobile and wearable devices. The study was supported by the Russian Science Foundation.

Lithium-ion batteries are ubiquitous in today’s electronic devices such as smart phones and laptops. Even NASA uses rechargeable batteries in many missions to provide electrical power for survival during eclipse periods on solar-powered missions…