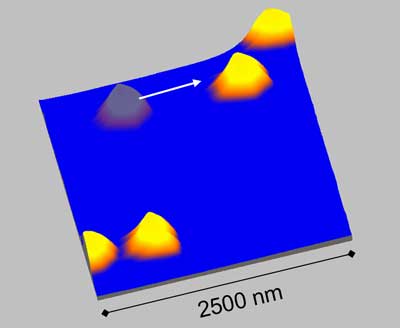 Friction is the name given to the force that resists the initiation of sliding motion between two surfaces; it is all around us and it occurs at all length scales. In simple terms: friction is a force that slows things down.

In many cases, it is exploited to improve our life (you couldn’t walk, drive or even write if there was no friction at all); but on the other hand, a reduction of friction is required to reduce mechanical energy dissipation and wear.

The reduction of friction is particularly critical for energy conservation where friction directly translates in a loss of efficiency and therefor higher use of energy for a particular task. About 1/3 of the world’s primary energy is dissipated in mechanical friction and 80% of machinery components’ failure is caused by wear. Friction and wear are also bottlenecks for micro-/nano-mechanical systems (MEMS and NEMS) featured with sliding components.

In Nature, there are no completely frictionless environments: even in deep space, tiny particles may interact and cause friction. Friction processes can be observed on all scales and dimensions.

This is one reason why you can’t have a perpetuum mobile, i.e. a motion that continues indefinitely without any external source of energy, as long as there is any friction.

However, there is a very special case where friction almost vanishes between two surfaces. This is a phenomenon, known as superlubricity, in which surfaces simply slide over each other with barely any resistance (a state that is called near-zero friction).

To date, however, most of the superlubricity observed experimentally has been realized only at the nanoscale and under extreme conditions like high vacuum or by using repulsive van der Waals forces. It therefore isn’t really suitable for real world applications yet.

The difficulty of achieving superlubricity in mechanical systems is due to the very complex physical, chemical, and mechanical interactions that occur simultaneously at the sliding interfaces of these systems.

Microelectronics like semiconductor devices are at the heart of the technologies we use each day. As we move into an era where we are stretching the limits of Moore’s Law, it is essential to find new ways to continue to pack more circuitry into each individual device in order to increase the speed and capability of our computers.