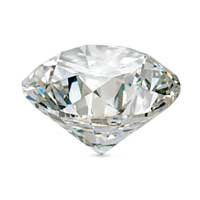 Diamond is prized by scientists and jewellers alike, largely for a range of extraordinary properties including exceptional hardness. Now a team of Australian scientists has discovered diamond can be bent and deformed, at the nanoscale at least.
The discovery opens up a range of possibilities for the design and engineering of new nanoscale devices in sensing, defence and energy storage but also shows the challenges that lie ahead for future nanotechnologies, the researchers say.
Carbon-based nanomaterials, such as diamond, were of particular scientific and technological interest because, “in their natural form, their mechanical properties could be very different from those at the micro and nanoscale”, said the lead author of the study (“Plastic Deformation of Single-Crystal Diamond Nanopillars”), published in Advanced Materials, PhD student Blake Regan from the University of Technology Sydney (UTS).
“Diamond is the frontrunner for emerging applications in nanophotonics, microelectrical mechanical systems and radiation shielding. This means a diverse range of applications in medical imaging, temperature sensing and quantum information processing and communication.
“It also means we need to know how these materials behave at the nanoscale – how they bend, deform, change state, crack. And we haven’t had this information for single-crystal diamond,” Regan said.
The team, which included scientists from Curtin University and Sydney University, worked with diamond nanoneedles, approximately 20nm in length, or 10,000 times smaller than a human hair. The nanoparticles were subjected to an electric field force from a scanning electron microscope. By using this unique, non-destructive and reversible technique, the researchers were able to demonstrate that the nanoneedles, also known as diamond nanopillars, could be bent in the middle to 90 degrees without fracturing.
As well as this elastic deformation, the researchers observed a new form of plastic deformation when the nanopillar dimensions and crystallographic orientation of the diamond occurred together in a particular way.
Chief Investigator UTS Professor Igor Aharonovich said the result was the unexpected emergence of a new state of carbon (termed 08-carbon) and demonstrated the “unprecedented mechanical behaviour of diamond”.
“These are very important insights into the dynamics of how nanostructured materials distort and bend and how altering the parameters of a nanostructure can alter any of its physical properties from mechanical to magnetic to optical. Unlike many other hypothetical phases of carbon, 08-carbon appears spontaneously under strain with the diamond-like bonds progressively breaking in a zipper-like manner, transforming a large region from diamond into 08-carbon.
“The potential applications of nanotechnology are quite diverse. Our findings will support the design and engineering of new devices in applications such as super-capacitors or optical filters or even air filtration,” he said.
Source: University of Technology Sydney

This paper presents a review of Ion Beam Technology. In this review the main applications and advantages of using Ion Beam technology for deposition processes when compared to technology such as plasma or evaporation (PVD) will be presented. To start with, an overview of how an ion beam is generated will be described. This will then be followed by a presentation and discussion of some advantageous applications of ion beam technology.