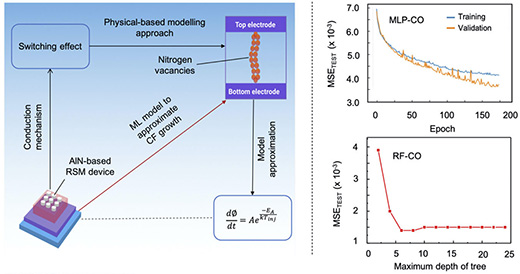 Resistive-switching memory (RSM) is an emerging candidate for next-generation memory and computing devices, such as storage-class memory devices, multilevel memories and as a synapse in neuromorphic computing.

RSM devices have gained significant attention due to their simple metal-insulator-metal (MIM) structure, which composes a dielectric material sandwiched between the top electrode (TE) and bottom electrode (BE).

Such processes depend on the amplitude and polarity of applied voltage in the unipolar and bipolar-switching modes, respectively. Applying a voltage between the TE and BE leads to the formation of nanoscale conduction filament (CF) in set process and the rupture of CF in reset process.

The formation of CF in RSM devices is typically based on electrochemical metallization (ECM) effect, valence-change memory (VCM) effect, thermochemical memory (TCM) effect and other effects. Aluminum-nitride-based RSM device exhibits bipolar switching. The growth of CF is governed by VCM effect and CF is formed by nitrogen-vacancies.

In this report (AIP Advances, « Modeling electrical conduction in resistive-switching memory through machine learning »), we present an alternative ML approach in which we avoid the need to solve traditional physical-based equations by directly learning the relationship between other-device-parameters to compute the CF-related compliance current (CC) value i.e., we establish a ML-CO model.

We show that this relationship can be learned via a data-driven approach and with excellent accuracy for many different samples to describe CF growth. Furthermore, we show that it can immediately be applied to real-device sampling by computing the CC value of RSM devices with just a few device parameters.

Moreover, as we have already implemented the approach with common aluminum-nitride-based RSM devices and verified the developed ML models on SiOx and TiO2 RSM devices, this can now be performed on a much wider range of RSM devices.

We have achieved three significant results in this work :

Notably, we sidestep the accuracy issues by directly learning the CC and other-device-parameters relationship via a data-driven approach and with high accuracy for various types of devices.

ML-CO models were evaluated using the mean-square error (MSE) value and a comparative analysis revealed that RF algorithm tends to perform better than MLP algorithm for CF growth modeling. The MSE value of RF algorithm is ∼0.0014, which is about an order of magnitude lower than a compact-physical-based-modelling MSE baseline of 0.0142.

By applying ML algorithms to learn the relationship between other-device-parameter values to compute the CC value, the proposed ML-CO model allows accurate prediction of CF growth to describe the switching behaviour. The data-driven ML approach can also be implemented and performed on a much wider range of RSM devices.

Additionally, achieving an appropriate CC value in a dynamic manner using AI-engine plugin could pave the way for programmable memory applications, e.g., in-memory computing. And this work would be of significant interest to the research community, including material scientists, electronic engineers, device manufacturers and computer designers, as a tool for discovery of new RSM materials and rapid screening of nanomaterials suitable for RSM, which could drive RSM commercialization.