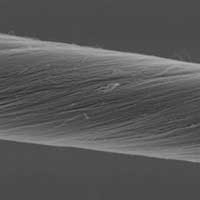 Improving the electrical and mechanical properties of carbon-nanotube-based fibers
The Lyding Group recently developed a technique that can be used to build carbon-nanotube-based fibers by creating chemical crosslinks. The technique improves the electrical and mechanical properties of these materials.
The paper was published in ACS Nano (« Enhanced Electrical and Mechanical Properties of Chemically Cross-Linked Carbon-Nanotube-Based Fibers and Their Application in High-Performance Supercapacitors »).
« Carbon nanotubes are strong and are very good at conducting heat and electricity, » said Gang Wang, a postdoctoral research associate in the Lyding lab, which is at the Beckman Institute for Advanced Science and Technology at the University of Illinois at Urbana-Champaign. « Therefore, these materials have wide applications and can be used as strong fibers, batteries, and transistors. »
There are many ways to build materials that have carbon-nanotube-based fibers. « Airplane wings can be made, for example, by embedding these fibers in a matrix using epoxy, » said Joseph Lyding, the Robert C. MacClinchie Distinguished Professor of Electrical and Computer Engineering and a Beckman faculty member. « The epoxy acts as a binder and holds the matrix together. »
However, combining the tubes to make such materials can lead to a loss in important properties. « We came up with a method to bring a lot of that performance back, » Lyding said. « The method is based on linking the individual carbon nanotubes together. »
The researchers dispersed brominated hydrocarbon molecules within the nanotube matrix. When heat is applied, the bromine groups detach, and the molecules covalently bond to adjacent nanotubes.
« When you pass current though these materials, the resistance to the current is highest at the junctions where the nanotubes touch each other, » Lyding said. « As a result, heat is generated at the junctions and we use that heat to link the nanotubes together. »
The treatment is a one-time process. « Once those bonds form, the resistance at the junction drops, and the material cools off. It’s like popcorn going off — once it pops, that’s it, » Lyding said.
The researchers faced many challenges when they were trying to build these materials. « We have to find the right molecules to use and the proper conditions to make those bonds, » Wang said. « We had to try several times to find the right current and then use the resulting material to build other devices. »
« This paper is the first step in making a new class of materials. It is likely that the performance we see now will become better because it has not been explored fully yet, » Lyding said. « We are interested in investigating how strong we can make these materials, how we can improve their electrical conductivity, and whether we can replace copper wires with materials that are 10 times lower in weight and have the same performance. »
Source: By Ananya Sen, Beckman Institute for Advanced Science and Technology

Scientists have taken a major step toward a circular carbon economy by developing a long-lasting, economical catalyst that recycles greenhouse gases into ingredients that can be used in fuel, hydrogen gas, and other chemicals. The results could be revolutionary in the effort to reverse global warming, according to the researchers.